Temperate Rainforest Animals: Info and photos of some of the specific animals, fish, birds and amphibians that live in the Olympic National Park and nearby rainforest regions and waterways, with links to the temperate rainforest plants that are prevalent throughout the Park and Olympic Peninsula.

The temperate rainforest biome naturally plays host to a variety of distinct creatures, and other wildlife that love the rain forest but that also thrive in the surrounding drier climates.

The following are typical temperate rainforest animals and general wildlife in the Olympic National Park and the Olympic Peninsula. (Click on any photo to open the photos in full size.) 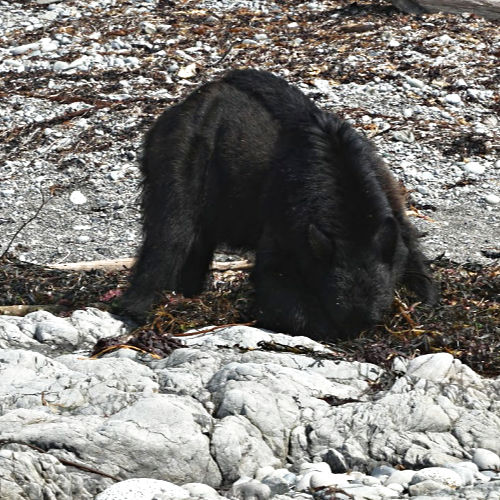 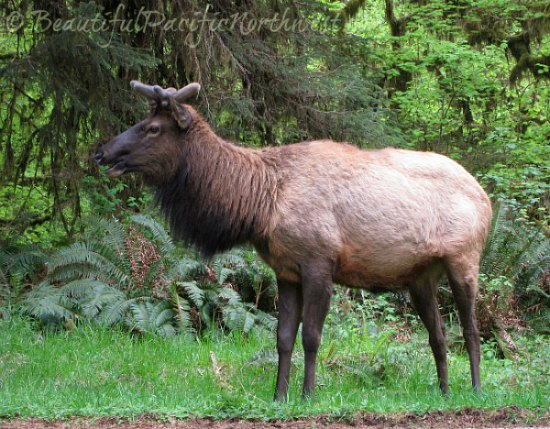 Bull Roosevelt Elk in the Hoh Rainforest in May

The American Black Bear (Ursus americanus) is the smallest of the North American bears and the most widely distributed throughout the USA. Olympic Black Bears, Ursus americanus altifrontalis, live throughout the Olympic Mountains, and can also be found in the Cascade mountains from British Columbia to Northern California. Above left: Olympic Black Bear scavenging on the shore of the Pacific Ocean in the Ozette region.

Roosevelt Elk (Cervus canadensis roosevelti; in some resources Cervus elaphus roosevelti; pictured above right) are a large subspecies of elk living on the Olympic Peninsula and the western slopes of the Cascades. See Roosevelt Elk pictures. 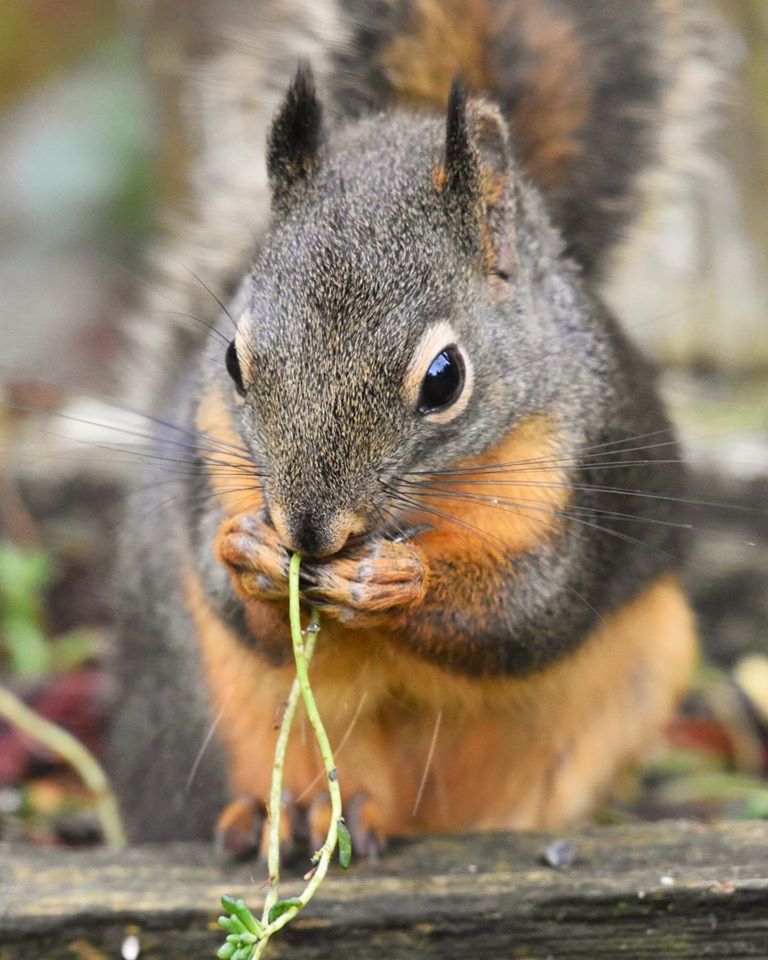 The Douglas Squirrel (Tamiasciurus douglasii) lives in the coniferous forests of the Pacific Northwest. Some researchers feel that the squirrel helps maintain the health of the Northwest forests.

They are active year round. Lacking cheek pouches, they scatter stashes of douglas fir, sitka spruce and shore pine cones and seeds for eating later, supplementing their diet of seeds with berries, mushrooms, acorns and bird eggs.

Douglas squirrels are grey-green with light rufous bellies in summer; while in winter their coats darken to brown, with grayer bellies.

Outside my second-story office window in Port Angeles WA are Douglas and Grand Fir trees. Their branches serve as runways for resident Douglas squirrels, delightful distractions.

The muskrat-sized Mountain Beaver (Aplodontia rufa) is not a true beaver at all, but a primitive, non-hibernating rodent called a sewellel. Their body shape is cavy-esque, however with smaller ears and eyes, and very large clawed feet.

To compensate for small eyes and ears, they instead have well-developed senses of smell and touch, thanks to ample whiskers.

Their main habitat are Pacific Northwest rain forests, although not exclusively so. Look for them in areas that favor deciduous trees although they can be found amongst evergreens as well.

Plant forage makes up their diet, which can include rhodendrons and stinging nettle which tend to be toxic to most other wildlife.

Sewellels are only distantly related to familiar tail-slapping beavers, both being rodents. The Northwestwildlifeonline website has an excellent write-up on the mountain beaver. 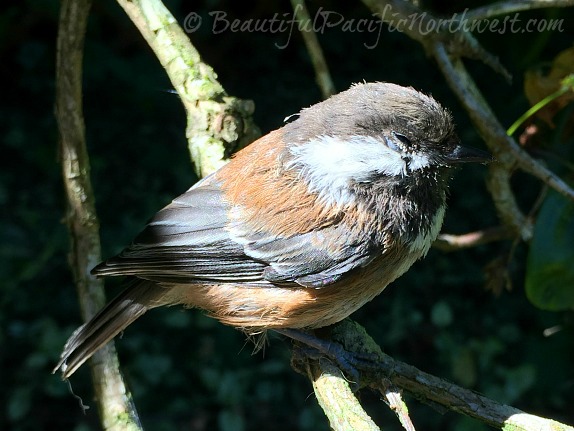 The Chestnut-backed Chickadee (Poecile rufescens) is a small bird but quite handsome in its black, white, gray, and chestnut-colored plumage. It lives year round almost exclusively in the Pacific Northwest. Port Angeles is blessed with significant numbers of this attractive bird.

Port Angeles and the Olympic Peninsula provides habitat for the Northern subspecies of Common Raven. This common temperate rainforest animal can be found soaring over the beaches, rain forests, and meadows of the region. 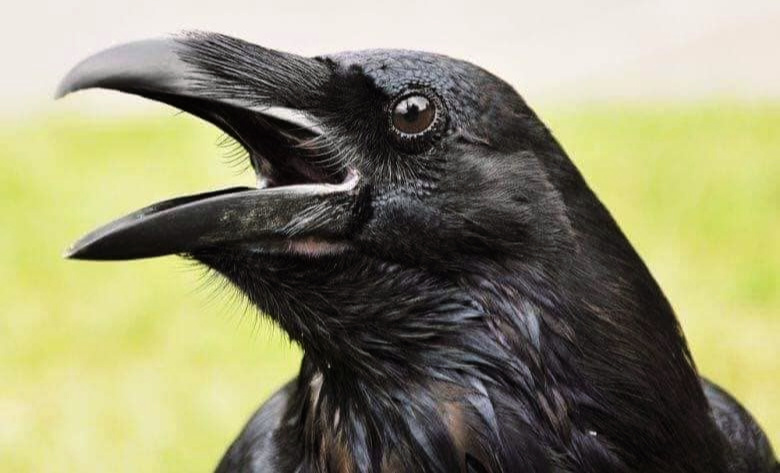 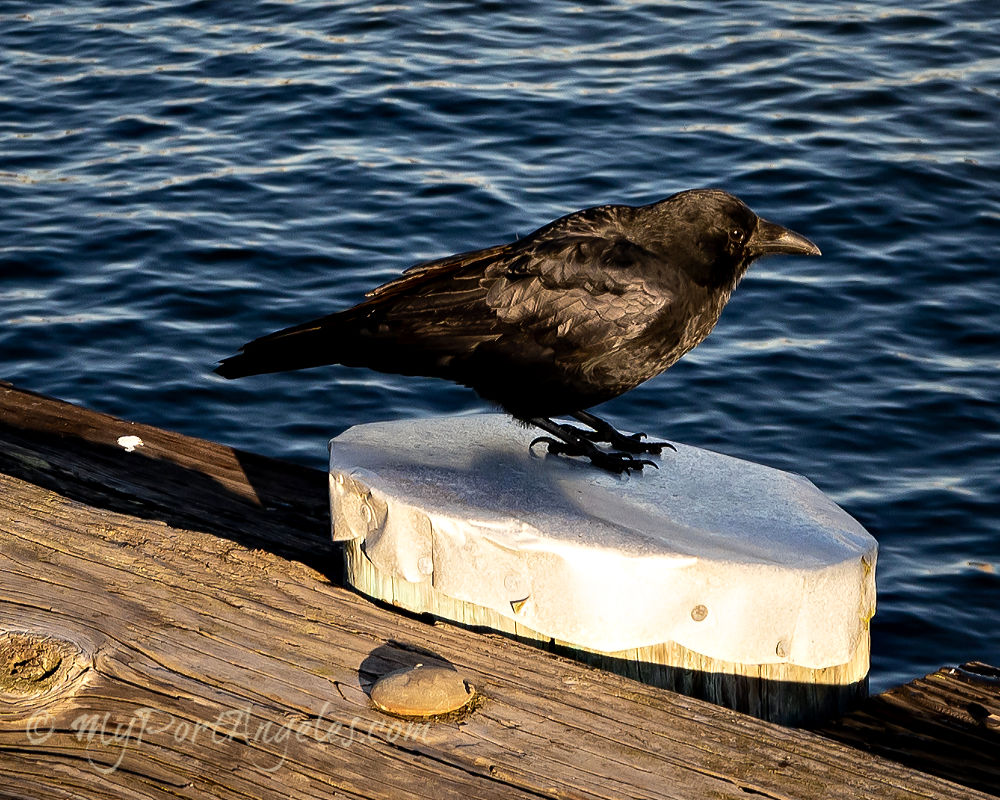 The Northwestern Crow (Corvus caurinus) is virtually identical in plumage to the very common American crow, however smaller, with a slender bill and smaller feet. They are reliably identified by range only – they can be found along the coasts, islands and beaches of south Alaska, British Columbia and Washington, and within some nearby urban areas.

The Varied Thrush (Ixoreus naevius) lives year round in the Pacific Northwest, but can be found in breeding grounds to the north as far as Alaska. Some may overwinter to the south and into California.

It is a vibrant orange and black/gray bird not to be confused with the American Robin. The varied thrush has a black head with an orange stripe behind the eye and a black stripe across the lower neck in sharp contrast to its orange breast and belly. Females are patterned similarly, however with the black markings in gray.

The Spotted Owl (Strix occidentalis) can be found all along the western coast and up into parts of BC, through the midsection of Mexico, and in pockets in AZ, UT, CO and NM. It is large, speckled, and lacks ear tufts.

It is certainly native to the Pacific Northwest forests, where it was at the center of Oregon and Washington logging controversies due to environmental reasons. 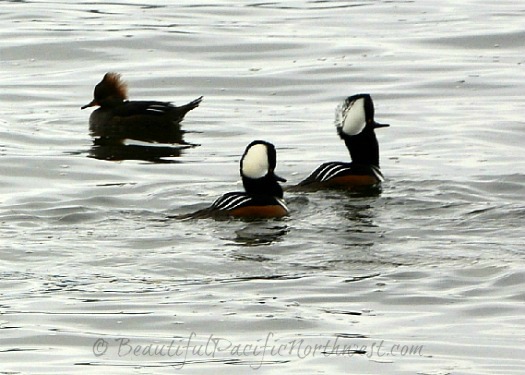 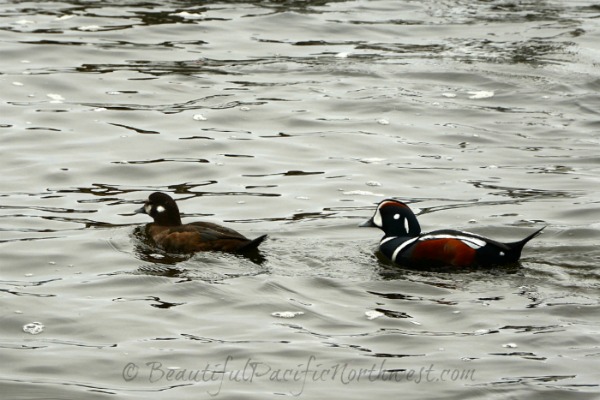 Waterfowl galore frequent the lakes, rivers, and shores of the Olympic National Park and Peninsula. Here are a few of the waterfowl species that are commonly seen here:

Harlequin Ducks (Histrionicus histrionicus) breed on fast-moving streams, and overwinters along rocky coastlines including those of the Pacific Northwest. (Pictured above.)

Hooded Mergansers (Lophodytes cucullatus) live year round in the Pacific Northwest, though they can also be found in many other locations throughout the USA.

You may indeed see one of these extravagant little diving ducks along the Olympic Peninsula coast, as we did. (Pictured above.)

The Marbled Murrelet (Brachyramphus marmoratus) is a sea bird related to puffins. Unlike other sea birds, they nest on the huge horizontal branches of 200-feet-tall old-growth evergreen trees in the Pacific Northwest and north to the Aleutian Islands, and then they overwinter at sea.

Nests of marbled murrelets have been seen in or near the Heart o' the Hills Campground in the Olympic National Park. 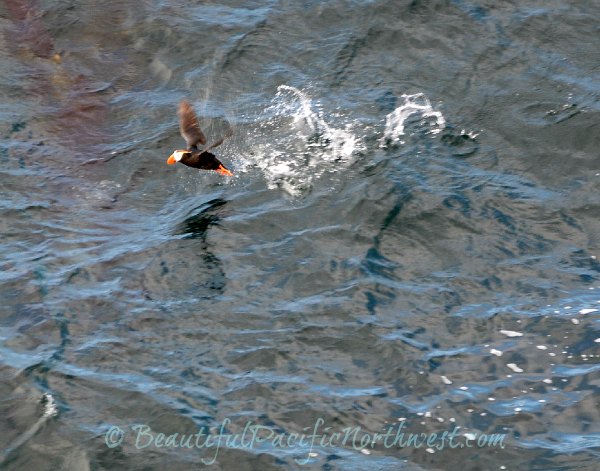 The Tufted Puffin (Fratercula cirrhata) lives throughout the waters of the north Pacific, nesting in rocks and cliff burrows from Northern California to the Aleutian Islands of Alaska.

The photo at right was taken on a cold but clear February day. 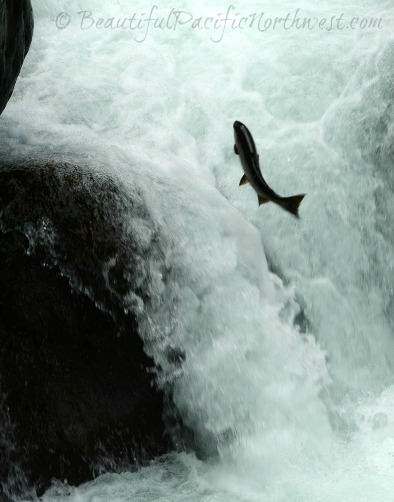 Coho Salmon on the way to spawn in the Sol Duc River.

A second distinctive species of trout known as Beardslee trout also populated Lake Crescent and Barnes Creek at one time. These have interbred with non-native trout introduced into Lake Crescent. What now remains is a population of hybridized "cutbows."

Pacific Salmon are a keystone species throughout the Pacific Northwest. Bears, eagles, wolves, other predators, and even the forests depend on the yearly salmon spawn for survival. 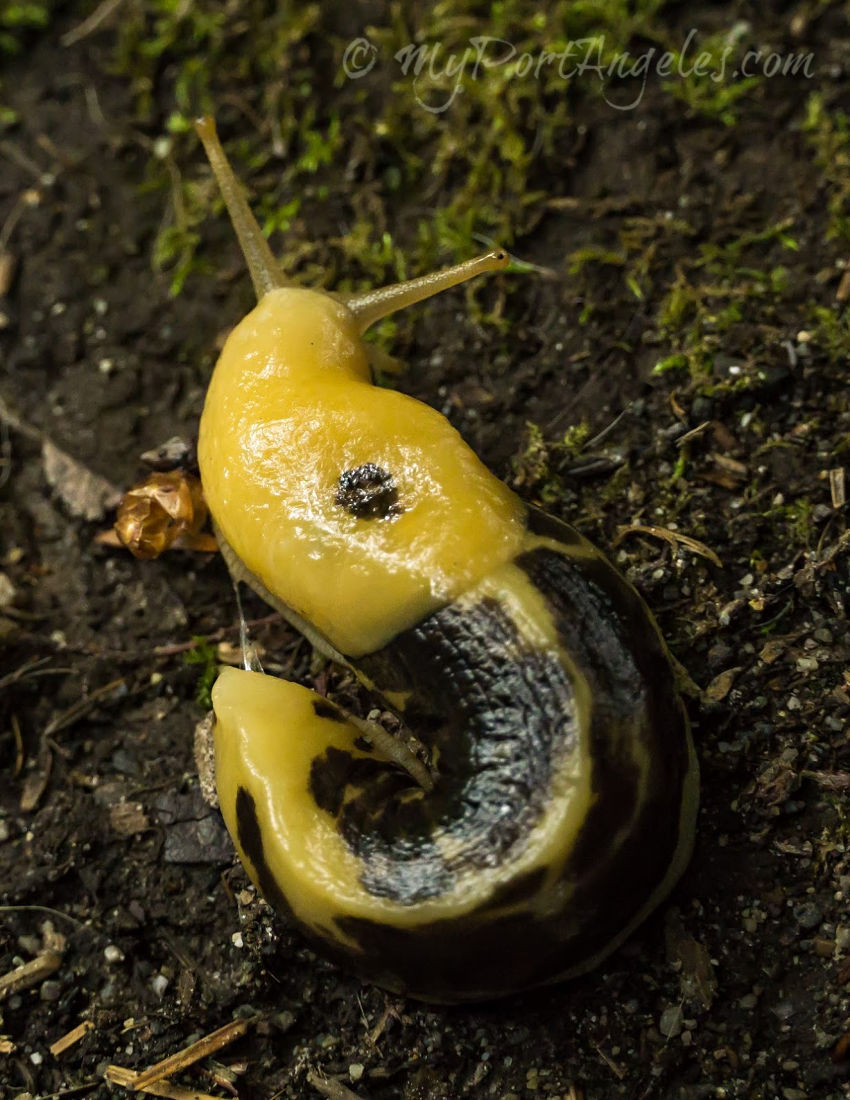 The Pacific Banana Slug (Ariolimax columbianus) is the second largest terrestrial slug species in the world, growing up to 10 inches in length. The cool, moist climate of the temperate rainforest is ideal for this mollusk.

They are yellow, brown, greenish, white or tan, with varying numbers of black blotches, up to and possibly so covered in spots as to appear black.

With teeth on its tongue, it saws off pieces of forage which it then consumes.

Right: The banana slug is actually an impressive temperate rain forest animal - this one was cruising through the forest near Cape Flattery. 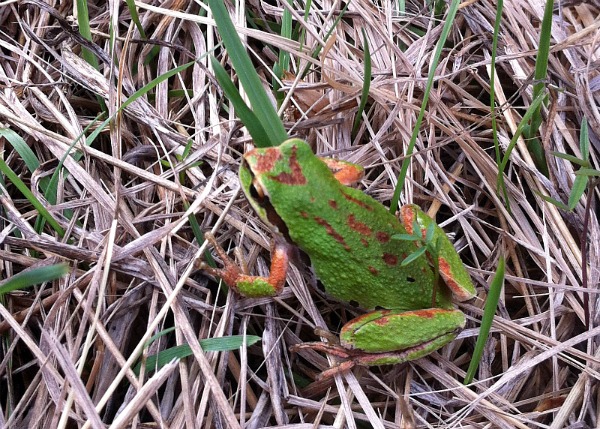 Mister-Toad.com is an excellent resource on the Pacific Chorus Frog, explaining the various reasons why the species has recently been re-classified a chorus frog rather than a tree frog. 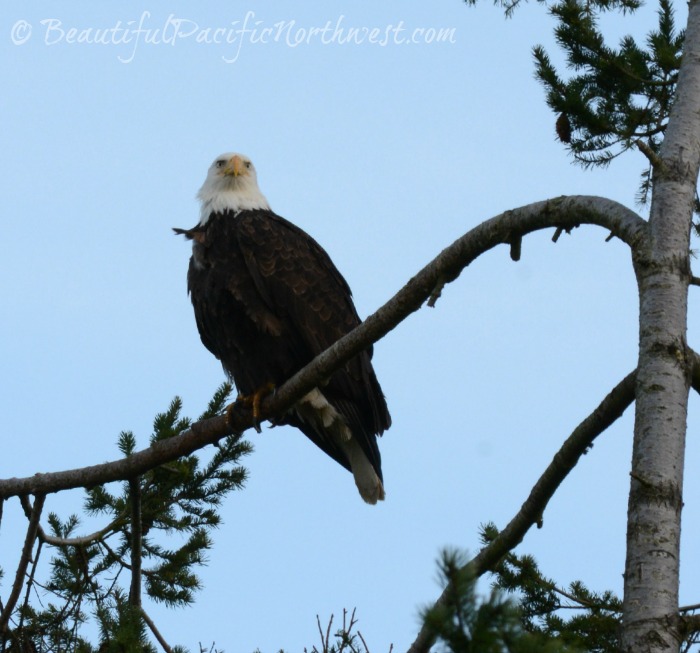 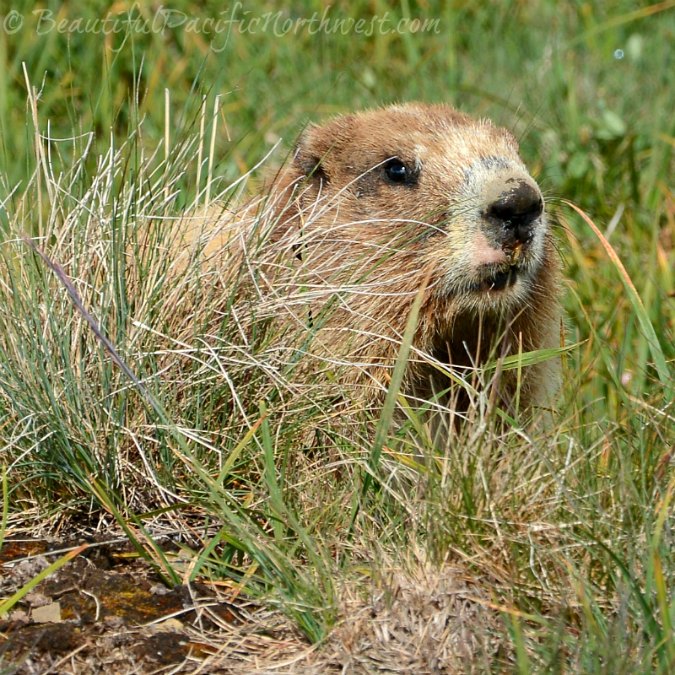 Search These Online Resources for More About Temperate Rainforest Animals

All About Birds: Website of the Cornell Lab of Ornithology

Xeno-Canto.org - Bird sounds from around the world

Catalog and Photos of "all" Wildlife (Colorado State University)

Other links you may enjoy: