Enjoy this collection of Mount Saint Helens photos portraying the volcano as she appears in 2017. Photo and history of Mt St Helens' 1980 volcanic eruption is included below. 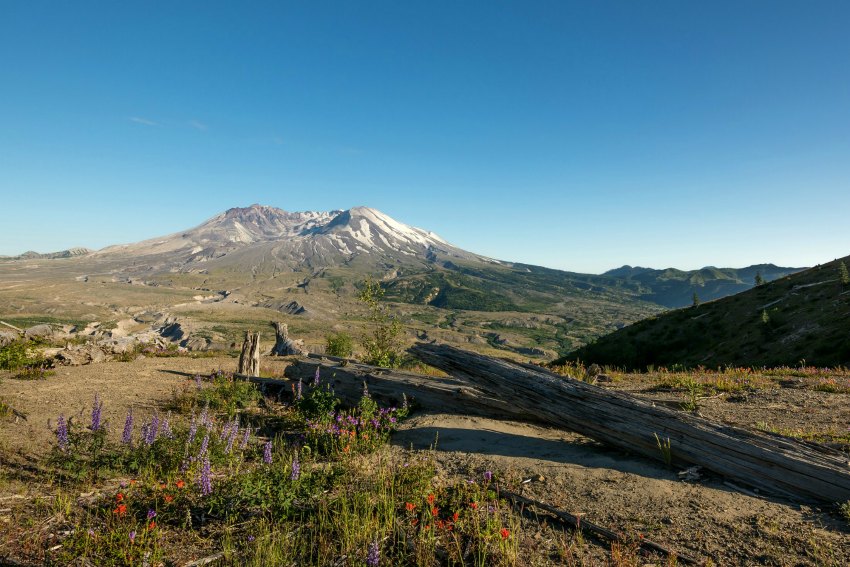 If you've come to Port Angeles for an extended stay but you find volcanos fascinating, we highly recommend an educational side trip to this national volcanic monument.

Weather measurements taken at Cougar, WA, very near Mt. St. Helens National Volcanic Monument. Clicking below opens a window with hourly forecasts for the next 24 hours.

Interestingly, after the 1980 blast, no efforts were made to rehabilitate the surrounding land. It was all left as a giant experiment, to see if or how Nature would heal itself. So what you see in these photos, the young trees, grasses, brush, and wildflowers, was all naturally regenerated. 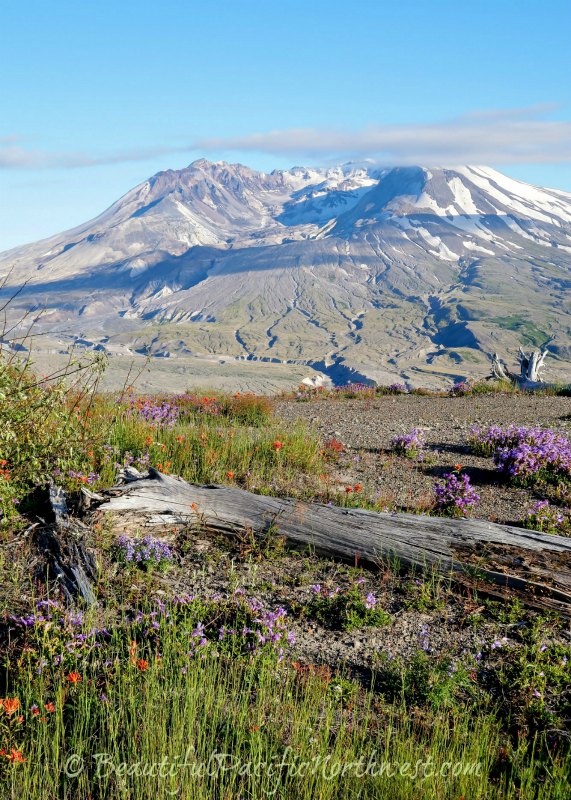 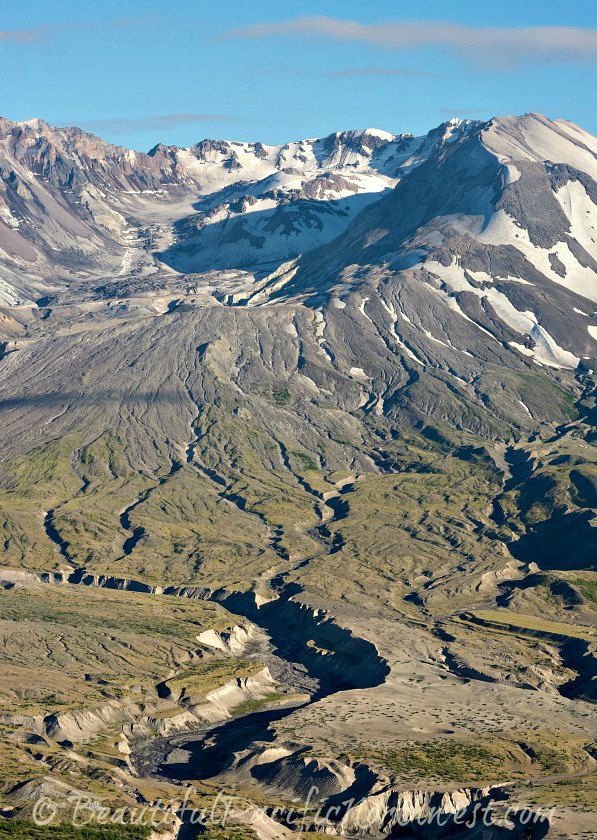 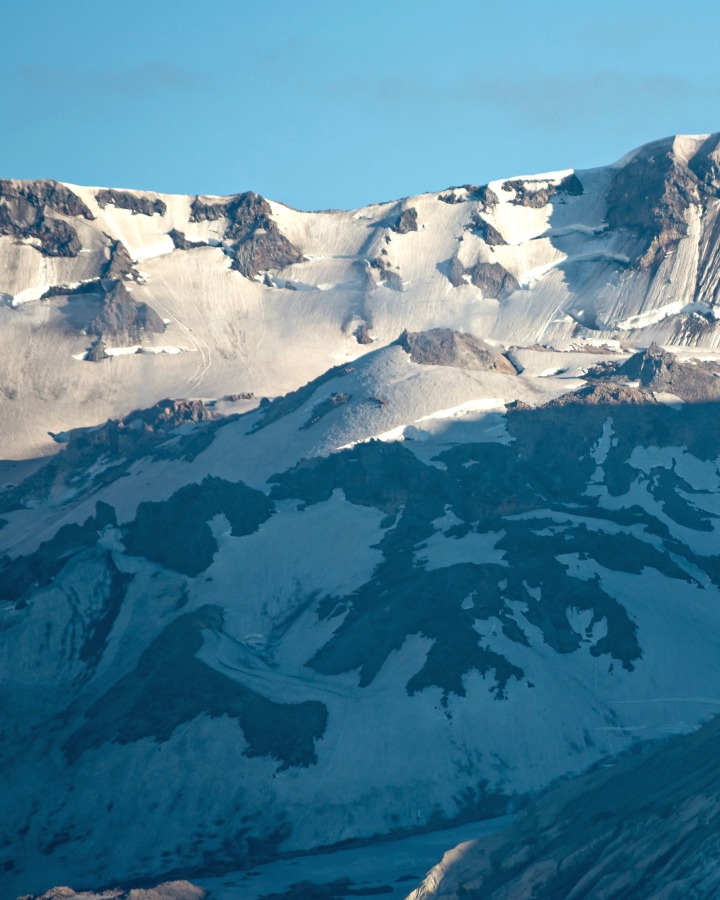 Close up of the crater of Mt St Helens volcano. The cone is still steaming.

On the Flanks of Mt St Helens 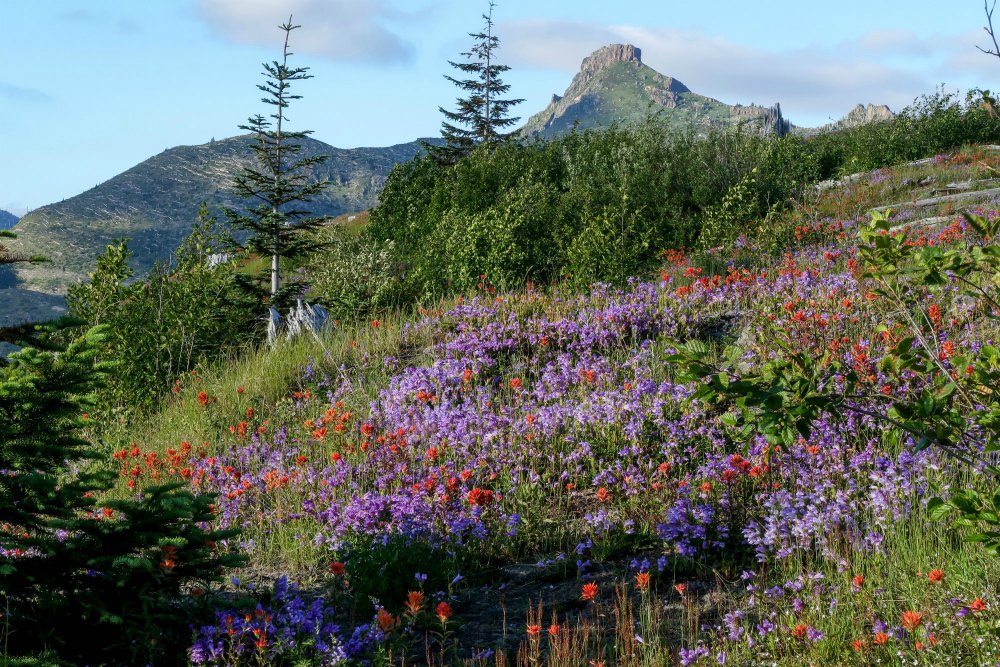 Decades after Mt St Helens blew her top, the wildflowers and vegetation are returning. 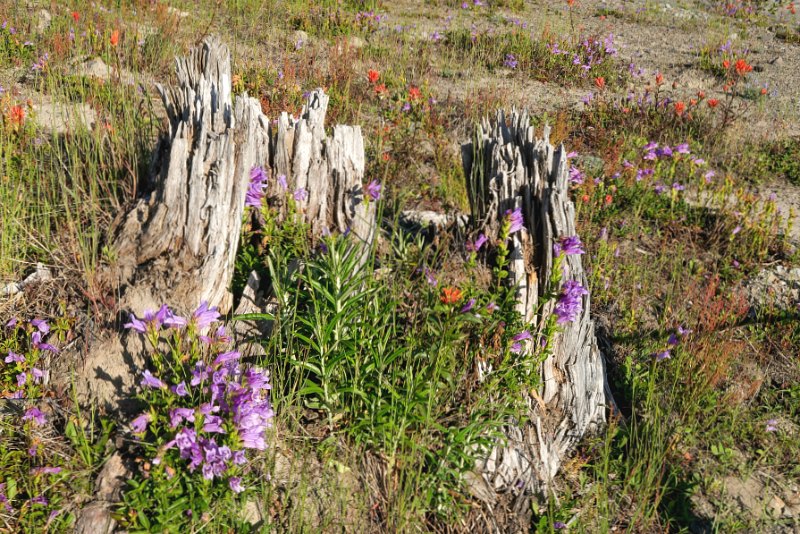 Stump of a tree blown into matchsticks in the 1980 volcanic explosion. 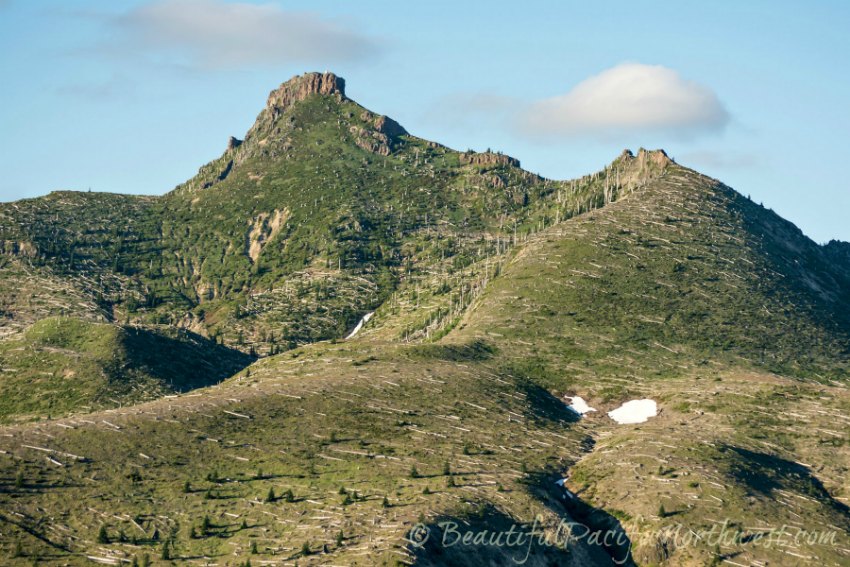 The entire forest covering a nearby hillside was flattened by the 1980 volcano blast. 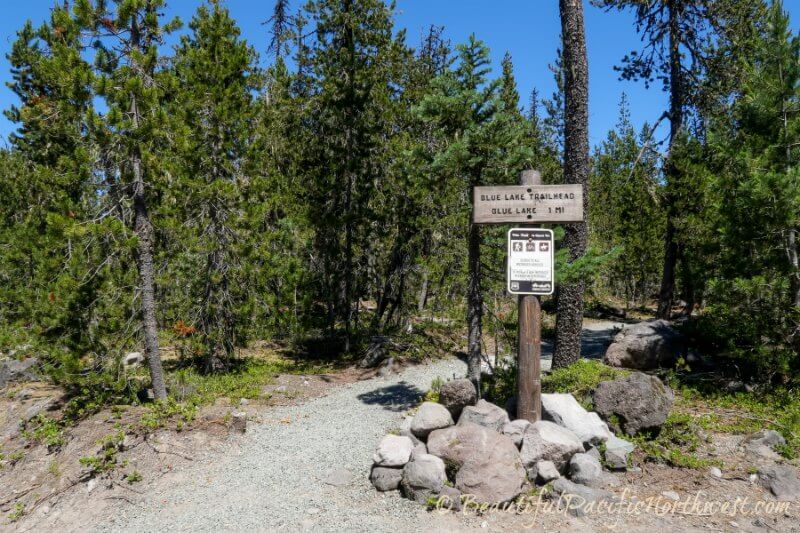 Blue Lake Trailhead on the flank of Mt St Helens 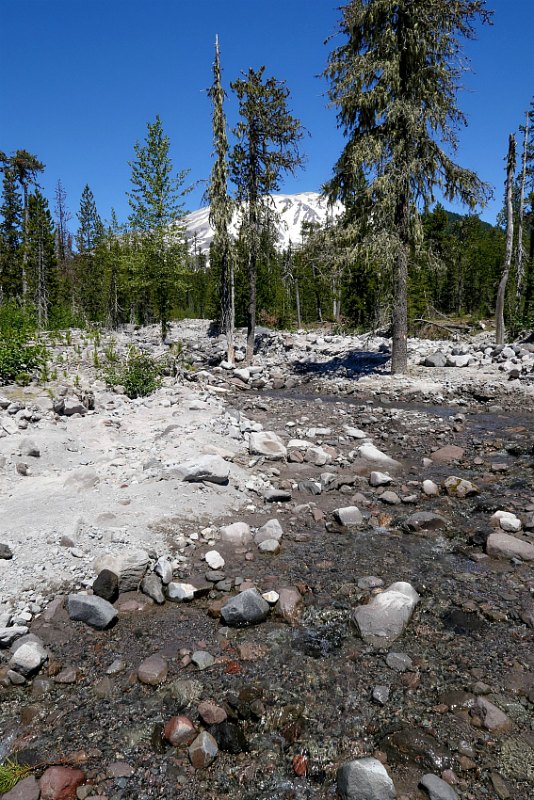 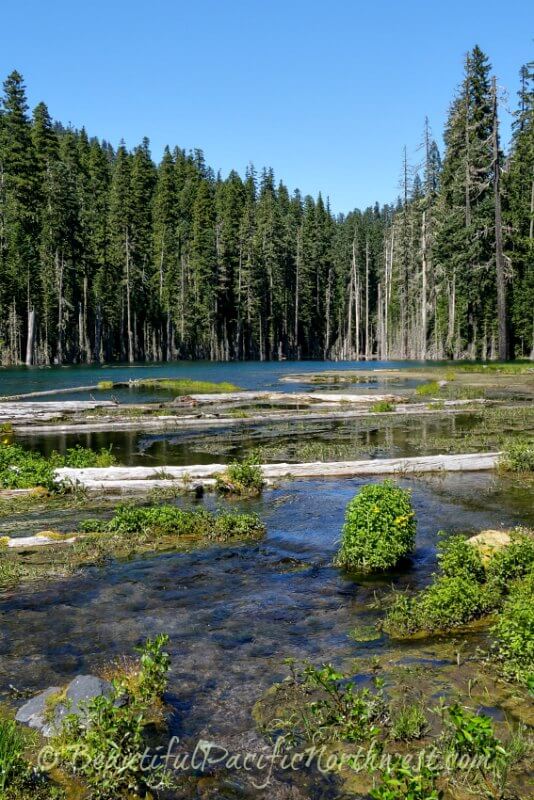 Tiny Blue Lake tucked in a fold of hills behind Mount Saint Helens. 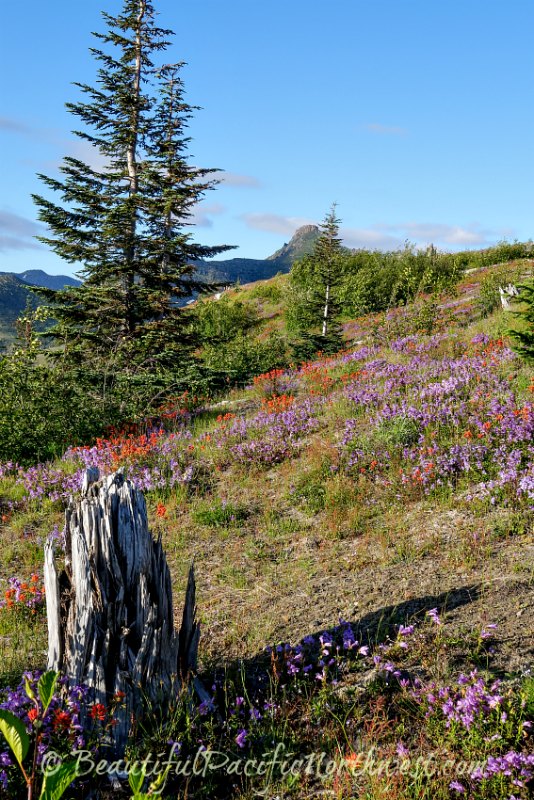 Hillside near the Mt St Helens Visitor Center, where both the devastation and the return of new life are evident. 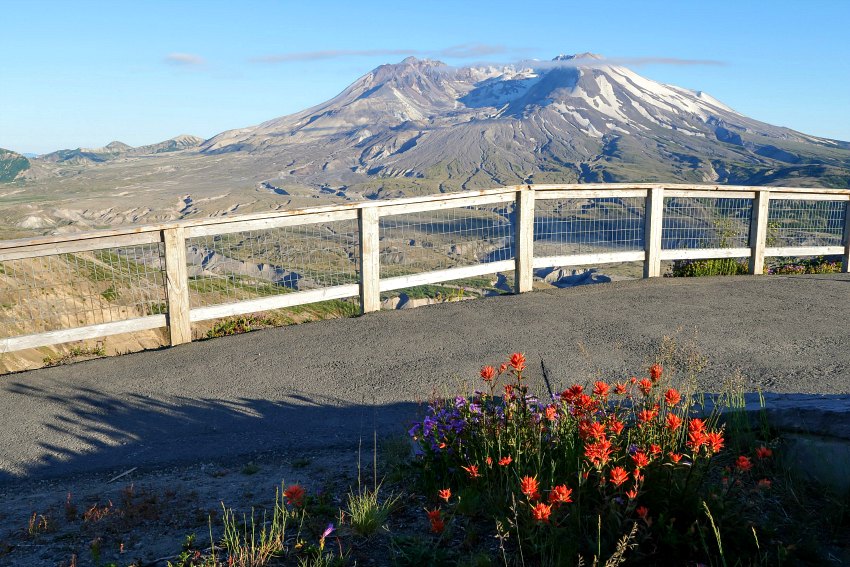 View of Mt St Helens from the paved circular hike near the Visitor Center. 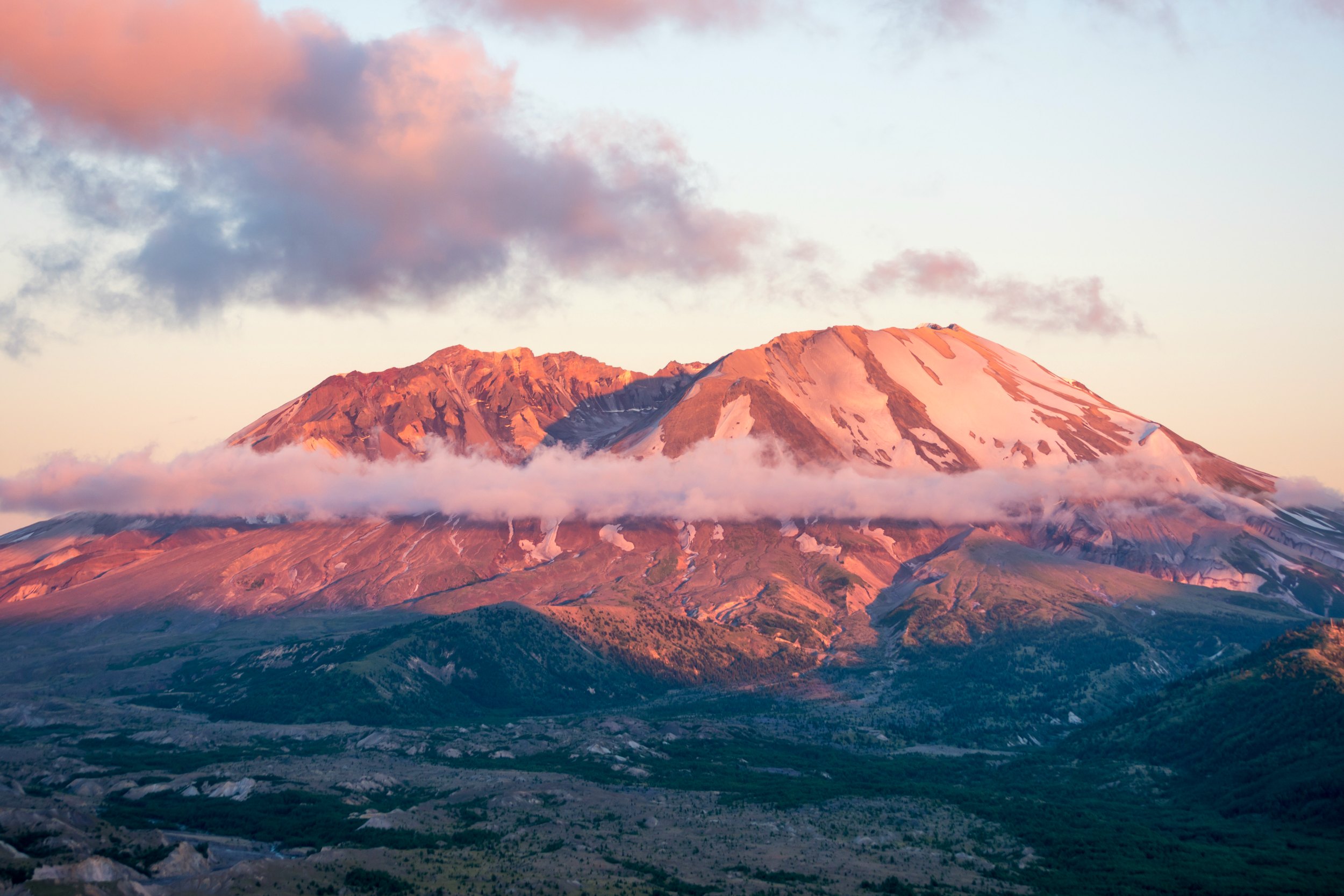 Getting to Mount Saint Helens

Choose one or both observation points:

If you prefer to get close up and personal with the volcano, you can hike to the summit of Mount Saint Helens and view the steaming cone of the volcano from there.

Mount Saint Helens is considered one of the youngest volcanos, its cone having taken shape only 40,000 years ago. Over the last 500 years, according to studies of the mountain’s strata, it has displayed a pattern of erupting and then lying quietly for roughly 120 to 150 years or so before erupting once again, over and over. Between 1857 until 1980, the giant slept, with a few emissions of steam in the midst of that period.

In her most recent glory, she measured approximately 9,600 feet (3,000 m) in height, the 5th tallest mountain in the USA. Through most of the year, her beautifully symmetrical cone was heavily cloked in robes of ice and snow.

On March 20, 1980, the volcano roused herself with an earthquake registering 4.2 on the Richter scale. Over the next days, the mountain quaked with a multitude of small quakes, 174 of them measuring above 2.6. On March 27, it belched ash and steam, the ash column rising to 6,000 feet. A crater took shape and the summit began to fracture.

Through April and early May, steam blasts continued along with 10,000 earthquakes accompanied by ominous groans and palpable shudders inside the volcano. Pressure within the mountain was noticeably disfiguring its north face with a bulge that grew slowly outward and upward. 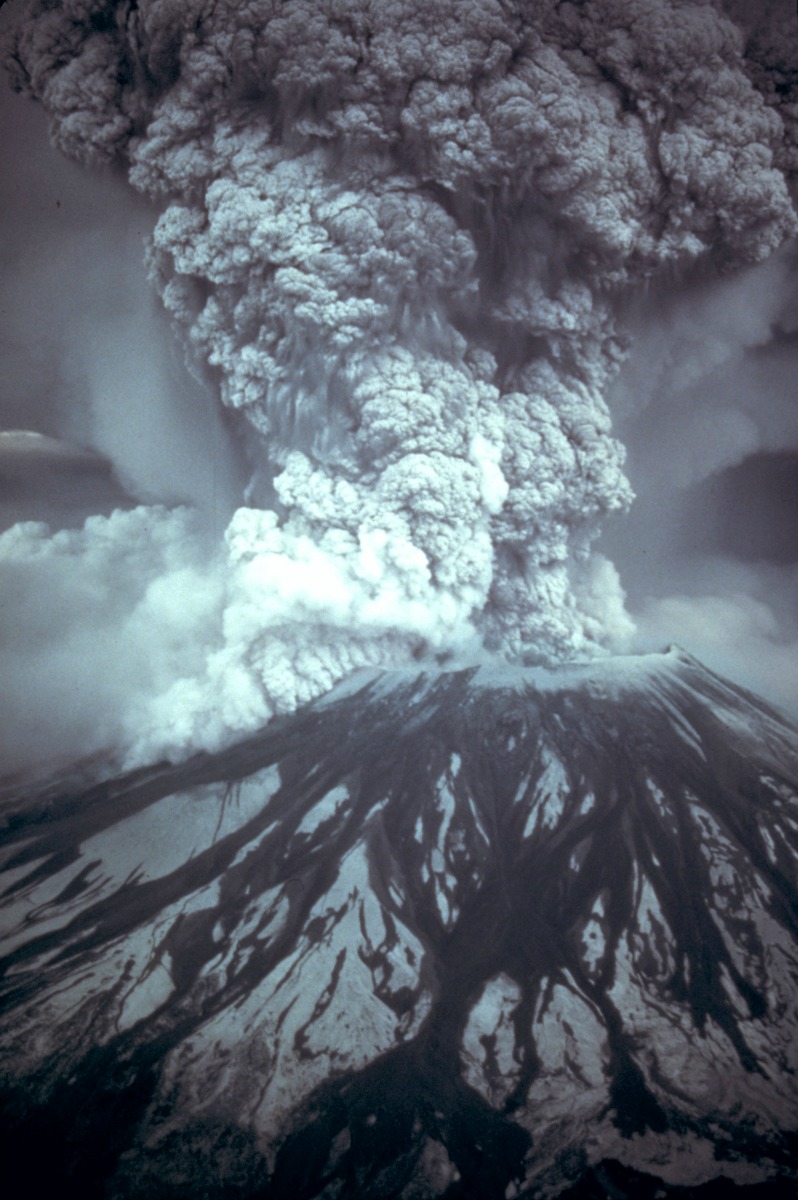 View of volcanic eruption of Mount St Helens on May 18, 1980 (USGS-Public Domain)

On May 18, 1980, at 8:32 a.m., a 5.1 magnitude earthquake struck one mile beneath the mountain. Moments later, the unstable bulge gave way and began sliding downhill, releasing pressure on the forces inside the volcano. The volcano exploded.

The eruption literally blew off the mountain’s north face before shooting sky high, flinging thousands of cubic feet of dirt, rocks, trees, pumice rock and ash outward and upward. The resulting mushroom cloud topped out at 40 miles wide and 16 miles high. The cloud initially drifted at 60 miles an hour to the east, reaching Idaho in three and a half hours. The volcano actively erupted for over nine hours, and then spewed fitfully through the night and over the next several days.

In the blast, Mount St Helens lost the top 1,300 feet (396 m) of her summit. The north side collapse of the mountain “produced the largest landslide-debris avalanche recorded in historic time” (Wiki). The debris avalanche moved at 110 – 155 miles per hour downhill. Most of it funneled into the North Fork of the Toutle River. The resultant debris field covered an area of about 24 square miles approximately 150 feet deep.

After the blast, one headline read: "What a Baby, What a Burp."

In 2004, Mt St Helens began extruding lava into the crater once again, although without the violence that characterized the 1980 eruption. It was considered active until 2008. Since then, the old girl has been remarkably quiet, though the lava dome inside the crater continues to steam.

From the Johnston Ridge Observatory, one can take a 1/2-mile ADA accessible hike to a memorial commemorating the names of the 57 individuals who died in the explosion, including old Harry Truman (not the president) who underestimated the danger and famously refused to leave his home at Spirit Lake Lodge.