Roosevelt Elk are endemic to Olympic National Park. Learn about their characteristics, habitat, elk in rut, relationships of native Americans to elk, and photos.

The Olympic National Park by itself is home to the largest un-managed herd of Roosevelt elk in North America – roughly 5,000 individuals.

The subspecies of elk known as Cervus Canadensis roosevelti (and sometimes Cervus elaphus roosevelti) were named after President Roosevelt, who traveled to the Olympic Peninsula, and then established the Mount Olympus National Monument in 1909. This National Monument was converted to Olympic National Park in 1938.

In fact, the park’s initial working title was “Elk National Park,” as it was intended that a large national park would protect these once-threatened animals from extinction.

It was a wise move. Numbers of elk, which were plummeting due to overhunting in Roosevelt’s day, have rebounded, and their populations are now stable. 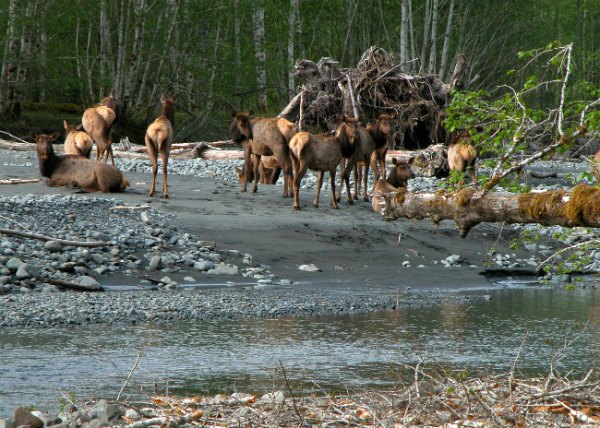 Of all the species of elk in the USA, Roosevelt elk are the largest. Elk in general can be found from the Rockies to the Pacific Ocean.

The whole process by which bull elk compete for mating rights is called the rut. It commences in September as bull testosterone levels rise. By then, the antlers have grown to their full magnificence for the year and the velvet has dried and been scraped off.

During the rut, the forest and meadows ring with the clashes of antlers and bugling back and forth between the big bull elk and any challengers to his ownership of the herd of cows. Other bulls, typically already 7-10 years old, fight with the dominant bull, crashing antlers-to-antlers and attempting to drive the opponent backward into insignificance.

Eventually one bull emerges the winner, claiming the “harem” of cows as its own. The new top buck will mate with the cows, guide the herd, and protect it from predators and other bulls.

The Olympic Peninsula and surrounding areas of the Pacific Northwest are prime habitat for Roosevelt elk. Populations of elk within the Olympic National Park are steady at roughly 5,000 individuals. Nevertheless, Roosevelt elk can be found as far south as northern California, and north into British Columbia, including a sizable herd on Vancouver Island.

Elk were also transplanted to Afognac and Raspberry Islands in Alaska, where they are doing well.

Although most elk commonly migrate between summer and winter habitats, the river valleys and western slopes of the Olympic mountain range provide consistently excellent forage throughout the year. The large herds of Roosevelt elk within these rainforest environments are non-migratory. Visitors to the Hoh Rainforest are frequently treated to sightings of elk. 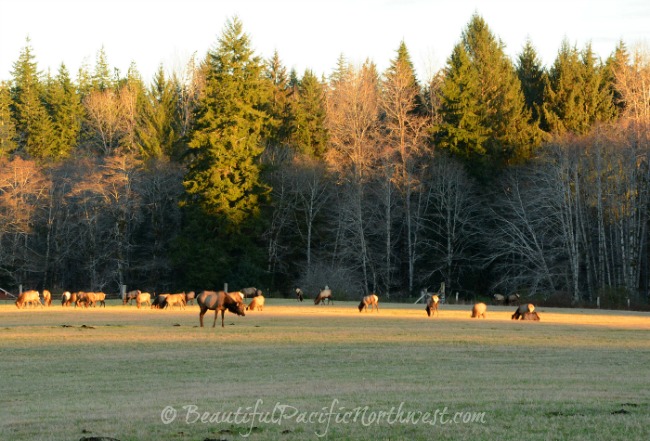 Roosevelt elk grazing a cattle pasture near Forks WA. Elk prefer open fields and meadows near the edge of the forest.

They retreat into the forest during stormy weather. The forest also hides them from predators and hunters, and conceals their calves from danger.

According to the Washington Department of Fish and Wildlife (WDFW):

“Elk have been an intrinsic part of Washington tribal culture for thousands of years. They have helped Indian people survive throughout the centuries by providing a continual source of meat and marrow for sustenance and vitamins. Elk also have been used for religious purposes, clothing, and drum making. To this day, the elk is part of traditional ceremonies and is essential for maintaining tribal culture” (https://wdfw.wa.gov/living/elk.html).

Elk is still a highly valued asset to the Quileute and other native tribes on the west end of the Olympic Peninsula, as described above. While much of native life today has become modernized, the tribes value and cherish their heritage by keeping the traditional art and ceremonies alive. For this they continue to utilize much of the elk, such as sinew, fur and teeth for jewelry, art, decoration, and drum-making.

More on the history of roosevelt elk and Olympic National Park

Elk and the Interconnectedness of the Pacific Northwest Environment 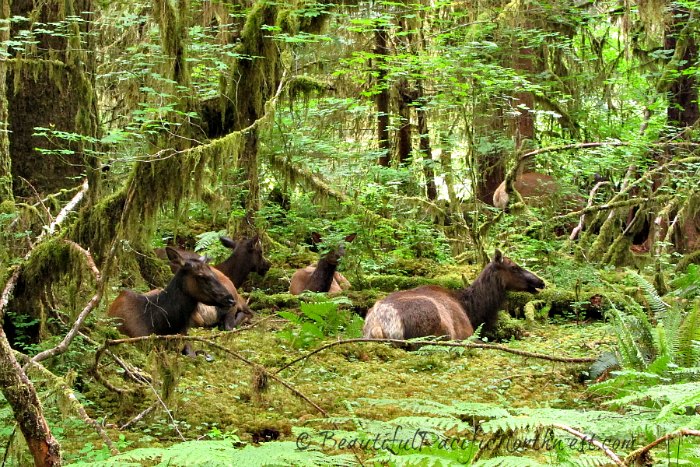 Roosevelt Elk herd in the Hoh Rainforest resting on a mid-afternoon in May.

To do this, the Quileute harvested trees for their homes and canoes from the same designated areas of forest near the Hoh and the Quillayute Rivers. In so doing they created several open meadows and prairies, some being several miles in length and breadth. The elk frequented those meadows, browsing the ferns, brambles and bushes, while the Quileute stalked the elk to obtain food and the other items that the elk carcass provided.

This self-sustaining system has lasted through the ages as it was designed to do, each species relying on other species, taking what they needed and no more, so there would be plenty for following seasons and for the use of one's children's children.