Temperate Rain Forest. Descriptions, explanations, and photos of the temperate rainy forests of the Pacific Northwest in the Olympic National Park near Port Angeles, WA. 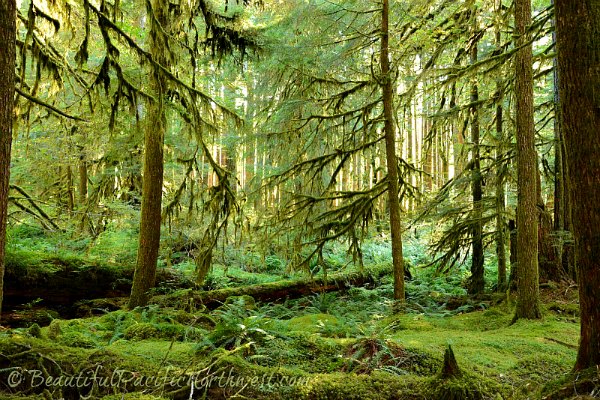 Various rain forests are located around the world. They come in two types, tropical and temperate.

As a whole, coastal temperate rain forests (a sub-set of the temperate variety of rainforest) encompass only 1/5 of 1% of the Earth's surface. They can be found in New Zealand and Southeast Australia; the southwest coastal areas of South America; Norway and other parts of Northern Europe; Asia, Taiwan and Japan; and small tracts inland around the Black and Caspian Seas. 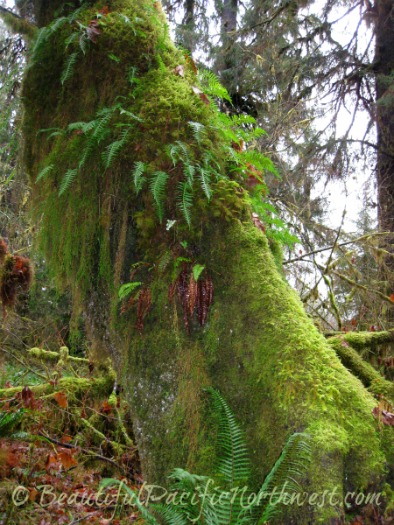 Trunk of a big leaf maple tree in the Hoh Rain Forest, enveloped in moss and fern epiphytes. This is only possible in a high moisture environment such as a temperate rain forest.

On the Olympic Peninsula, temperate rain forests are preserved within these Olympic National Park regions:

The closest "official" rain forest to Port Angeles is the Hoh Rain Forest, which is 2 hours away by car.

However if your time is limited, consider visiting the Sol Duc River Valley, which gets over 99 inches (251.5 cm) of rain per year, and is just an hour west of Port Angeles. A visit to Sol Duc will not disappoint! In fact, the Sol Duc Valley is one of the most photographed regions in the Olympic National Park.

Another option are the Olympic National Park beaches, which each receive over 100 inches (254 cm) of rain per year. Rialto Beach is 1.5 hours west. 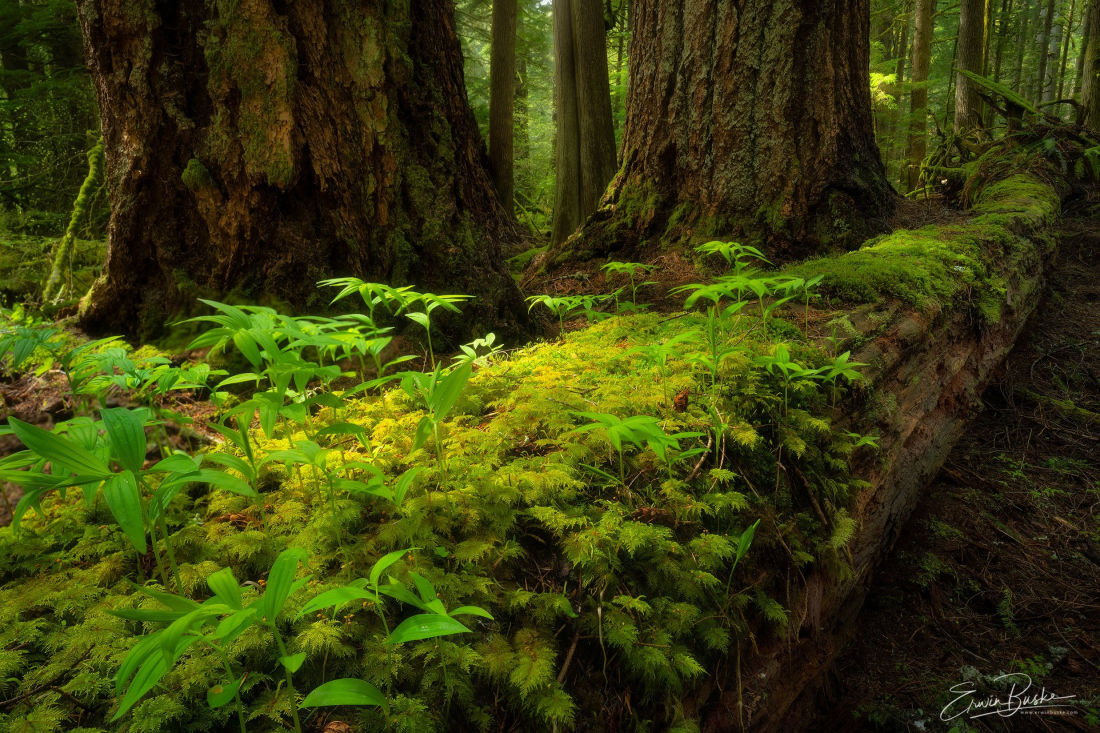 This fallen nurse tree in the Federated Forest near Mount Rainier will eventually support growing tree saplings. To purchase this photo, click the pic.

Photo above: Credit and Thanks to: Erwin Buske Photography. Purchase this photo!

The definition of the meaning of "rain forest" varies from country to country. Parameters may also differ from region to region depending on the particular features of that region.

But however you define it, three things must be in place in order to label an ecosystem a coastal temperate "rain forest":

The temperate rain forests of the west Olympic Peninsula easily fulfill all three parameters, since they are located on the west slopes of the Olympic Mountain range next to the Pacific Ocean, and receive on average 12 to 14 feet of rain each year.

The largest tract of untouched temperate rain forest in North America is found in British Columbia. It too is situated between the Coastal Mountain Range and the Pacific Ocean.

In the United States, significant logging operations before the establishment of the Olympic National Park in 1909 occurred throughout the Pacific Northwest, including the Olympic Peninsula. Nevertheless, some stands of old growth can still be found. Some old-growth trees are reported to be 1,000 years old or more. 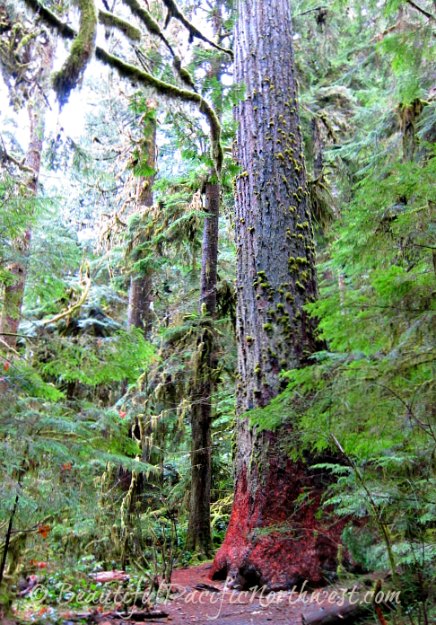 The Olympic Peninsula temperate rain forest is one of only seven in the world and the only one in North America.

Due to the heavy rainfall and relatively mild climate, some conifer species in the Pacific Northwest can reach up to 300 feet in height and 58+ feet in diameter.  The only real dangers to the area are landslides, high winds, avalanches and floods.

Synergism of Forest and Sea

The two systems - forest and sea - are inextricably and synergistically intertwined, for their proximity and design are what create the temperate rain forest. 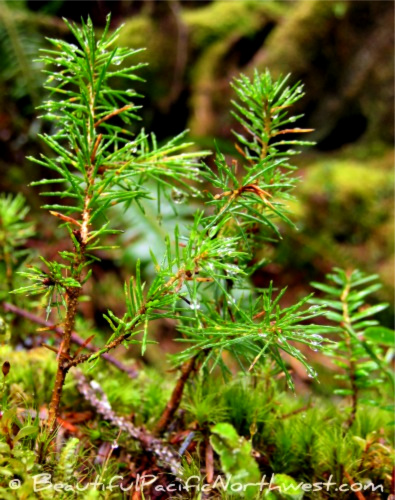 Water droplets hang on the needles of these Douglas Fir and Western Hemlock seedlings thriving on a moss-blanketed nurse log.

Lowland valleys rise up to mountainous terrain, from which nutrients from decaying matter find their way into streams and rivers flowing into the sea providing nutrients to support marine life.

The sea in turn, provides the rain, wind, and climatic conditions necessary to create and support the rain forest biome.

The fervent growth and copious moisture within this rainy ecosystem, or biome, produces an abundance of pine needles, twigs and leafy matter that falls to the forest floor, decaying and providing rich soil to support a large ecosystem. The rain forest biome is rich enough to support all its denizens, including various migratory species. 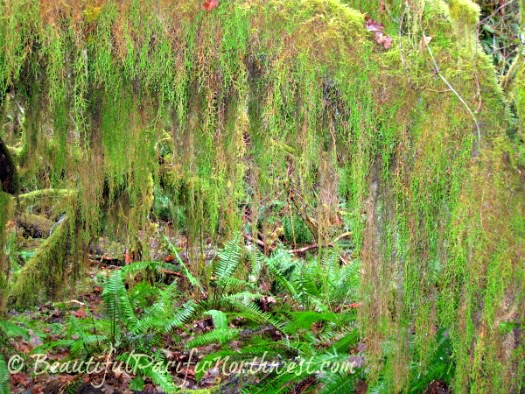 Multiple species of moss festoon a tree trunk. There's some wood under there, somewhere!

Over a hundred varieties of mosses festoon the branches of cedar, alder, Sitka spruce, Western Hemlock, and Douglas firs while licorice fern, cat-tail moss and lungwort cling to the understory branches of big-leaf maples, vine maples and dogwood.

All of that shades a carpet of lady ferns, lichens, liverwort and sword ferns, with trillium and the shamrock-shaped Oregon wood sorrel (Oxalis oregona) completing the ground cover. See Temperate Rainforest Plants.

Some scientists suggest that the North American temperate rain forest may contain the highest fungal and lichen diversity of any forest system.

Cutthroat and steelhead trout populate the rivers, lakes and streams. Several species of salmon are keystone species within the temperate rain forest, the nutrients of their bodies feeding both plants and animals after each spawning season.

Bears munch salmonberries and huckleberries, dining on salmon during the salmon spawn. Red cross-bills pry seeds from fir-cones, while black-tailed deer and Roosevelt elk prune just about everything. Great horned owls guard the night as voles, deer mice and shrews scurry to stay out of sight and off the radar.

Salamanders and lizards gather 'round to hear Pacific tree frogs voice their opinions.

Tiny wrens and chickadees flit between branches singing for their suppers, bald eagles swoop for salmon, ravens, crows, and stellar jays dip and dive within the canopy of trees.

Eagles and weasels; bears, bobcats and mountain lions; fishers and foxes; all have a place in the chain of command here. See Temperate Rainforest Animals. 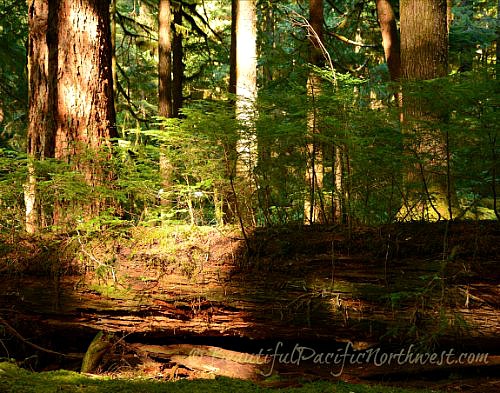 Many saplings are thriving on this fallen nurse tree. In 100-200 years, one may find a beginning colonnade right here.

When one of the giant trees falls, perhaps by high winds, it can take up to 100 years to decompose, leaving plenty of time for its remains to support the next generation. These are commonly called nurse trees because their decaying structures nourish the seedlings that have sprouted on top of the log for many decades, until they are nearly giants themselves. 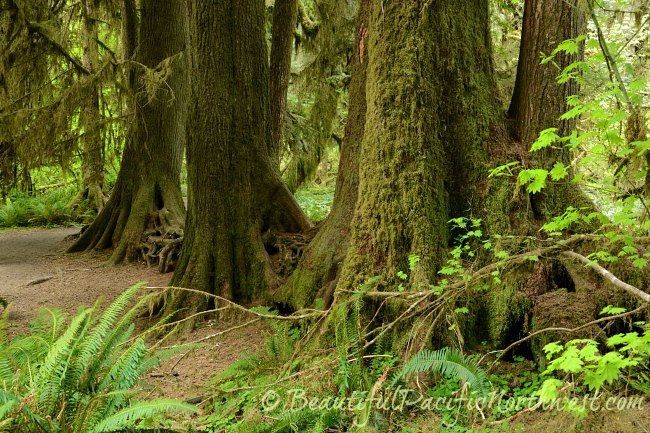 Colonnade of spruce mark out the location of a long-rotted nurse tree in the Hoh Rain Forest.

As these saplings grow, their roots can stretch around the nurse tree, thickening and strengthening as the tree grows. When the nurse tree has finally disintegrated, the empty hole where the nurse tree once lay becomes evident. Trees that got their start on a nurse tree sometimes look like they are standing on stilts because of the hole circumscribed by the protruding roots. 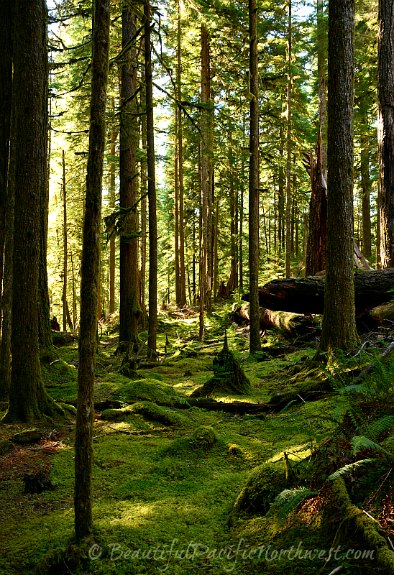 Stands of colonnade trees (pictured above) result from the saplings that have grown up all in single file along the length of a fallen nurse tree. See Hoh Rainforest.

To walk through a temperate rain forest is to slip into an other-worldly and ancient environment where the cycle of life and death is evident, passing from sire to abundant offspring in the continuing nurture of itself.

Footsteps are softened by carpets of moss, leaf litter, and shamrock-shaped Oxalis.

Senses are calmed and re-prioritized.

Nature has a way of restoring our souls, pressing its wisdom into us, reminding us of who we really are.