Canada Geese are ubiquitous throughout the Pacific Northwest, and perhaps throughout the United States and beyond. They can be found resting, nesting, feeding, and flying over Port Angeles and the Olympic Peninsula, at times in significant numbers. In fact, we even have a pair that come back year after year to nest near the shore of Lake Crescent WA.

One of about 11 sub-species and native to all parts of North America and down into Mexico, these majestic and graceful birds are the first spring arrivals in the north and the last to leave before winter sets in. On any given day they can be found in neighborhood parks and ponds, lakes and golf courses, even airports. 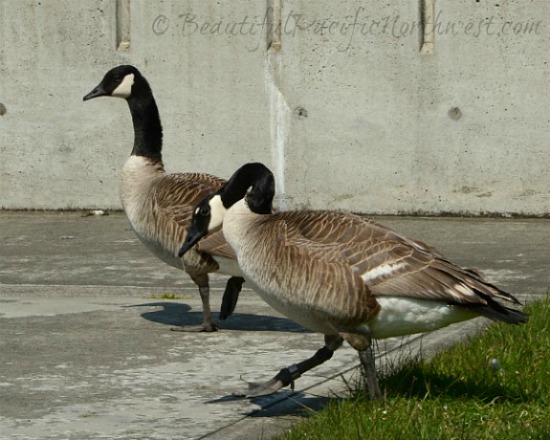 Adult Canada geese live up to 24 years in the wild. In size and weight, adult Canada geese range anywhere from 30 - 43" long, weigh 7 - 24 pounds, and sport a wingspan of between 4 - 6 feet. Their black head is divided at the neck by a white chin strap with the black continuing down the neck ending at a bright white upper breast, darkening to a mottled tan, white and grey/brown body with a white rump. Goslings are born yellow with grey-green feathers and by weeks 7 - 10, are able to fly and forage for themselves.

Geese are loyal friends, watching out for each other. Ganders (males) and geese (females) will mate for life. If one dies, the surviving mate will mourn for an extended period of time and then eventually find another mate.

During the mating season, the male becomes very territorial, loyal to only one, defending his mate from predators, and other geese, while she builds the nest. She will generally choose a raised site, often the same site as the previous year, where there's a fairly open 360 degree view and feather it with lichen, moss, twigs and down. Though both ganders and geese are very protective of the nest, it's the gander who becomes fierce against their natural predators, which include foxes, raccoons, bear, coyotes, birds of prey, dogs and humans.

After the goslings are hatched, the gander softens his attitude and becomes more tolerant. When there are several clutches of goslings in the same area, the adults will often draw them into groups, forming what is called a "creche," and will, together, watch over to provide protection for the entire group.

Below: Anyone on the ground would have heard this gaggle of Canada geese coming from miles away. Seemed like every bird was honking non-stop. 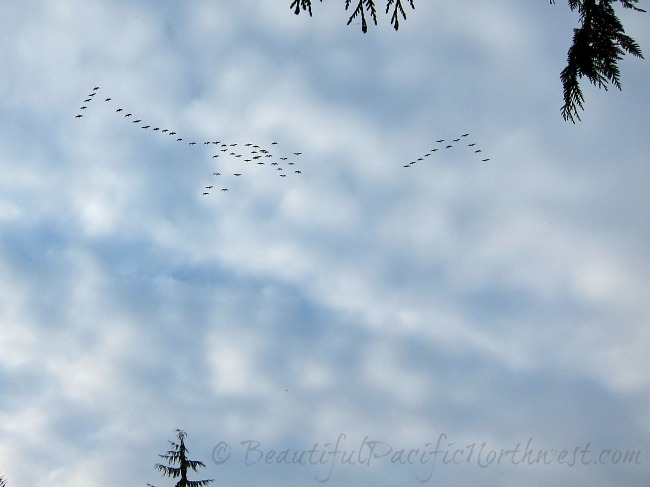 During their migration the flock will form a V shape. The body of the lead goose breaks the force of the wind, providing a draft effect for those geese flying in formation behind it.

Since flying at the point is the most energy-draining position, the geese change leaders on the wing regularly, allowing the flock to efficiently log up to 1,500 miles in a day, all the while honking important messages regarding flight speed and direction. Canada geese have excellent day and night vision, and excellent memories, recognizing landmarks on their journeys to and from their breeding grounds.

With up to 13 distinct voices, Canada geese communicate with each other through soft clucks and murmurs of contentment to loud honks of alarm. Goslings still egg-bound are able to talk with their parents by soft happy peeps or louder distress calls.

When not migrating, Canada geese will feed up to 12 hours a day grazing on grasses, leaves, roots and leftover grains in fields, especially when they are preparing for their spring and fall migration and in preparation for mating and incubation.

In certain instances Canada geese are considered pests as larger flocks can cause problems by compacting the soil making it difficult to cultivate and leaving behind a poopy mess which could contain such hitchhikers as: bird flu, botulism, salmonellosis, various parasites, bacteria and other viruses, which could infect humans and other animals. Large flocks can even wreak havoc at airports, delaying planes and flying into engines causing engine failure.

Below left and right: Canada goose photos of geese and their goslings near a private pond in Indian Valley WA. Photo Credit: Leslie Bergman. Used with permission. Click on photos to view at full size. 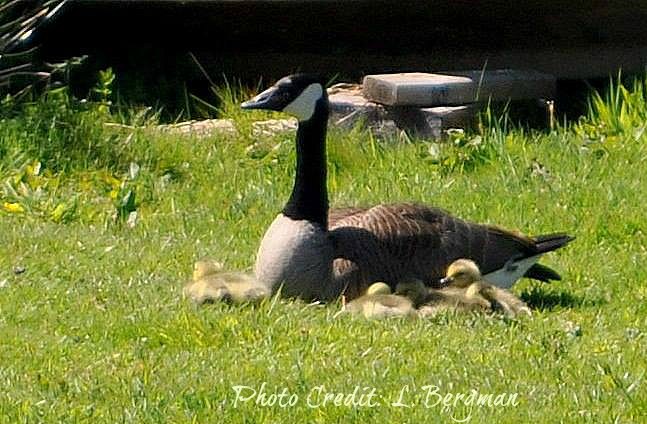 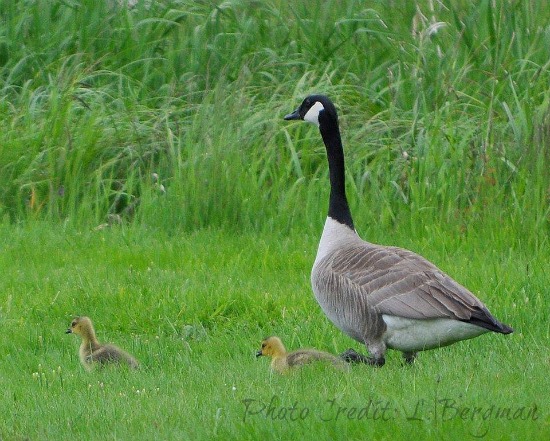 Below: A very cute family, Papa and Mama Geese with their flotilla of fluffy goslings. Don't let the happy scene fool you. Get too close, and Mama Goose is liable to hiss loudly, fly at you and smack you up-side the head with her wings. Canada geese can be very aggressive if they feel threatened. 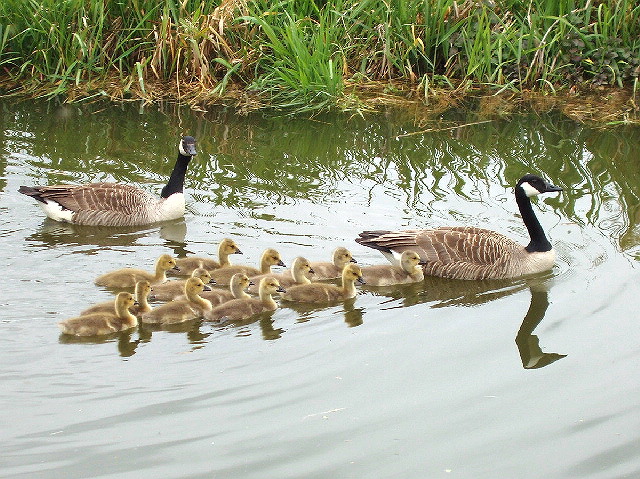 Above Photo Credit: Geese and goslings swim in V-formation - geograph.org.uk - 429191" by David Hawgood. Licensed under CC BY-SA 2.0 via Wikimedia Commons

Below: Canada geese feeding in the Port Angeles harbor take flight for safer foraging grounds to the great disappointment of an approaching youngster. 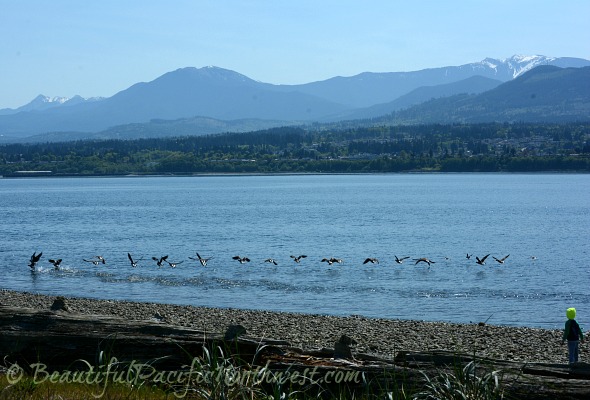 Sometimes Canada geese over-winter in well established and populated areas where there is enough grain, grasses and berries to sustain them.

Perhaps you've discovered that they have no qualms about begging from humans.