Victoria Canada. Victoria BC illuminated - history, fascinating attractions, exciting events, and the best lodging and eateries in town, with links to more information. 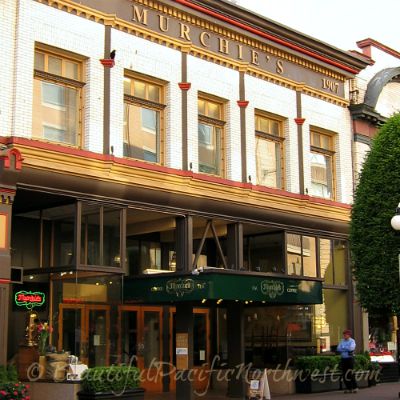 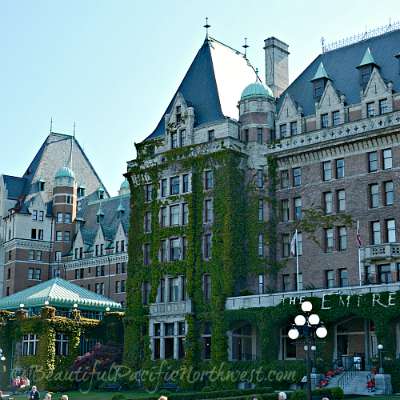 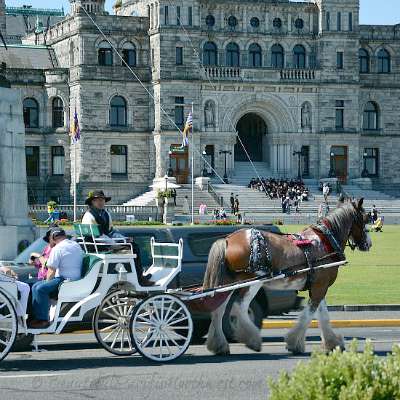 Victoria is truly amazing, she's magical, irresistible, delightful and wild, beautifully clothed in spruce, fir, and flowers, embraced by the sun and the Salish Sea. She's a city, a lady, worthy of her beauty.

And highly worthy of a side excursion as part of your vacation or visit to Port Angeles Washington in the USA!

Victoria Canada is situated on a calm inner harbor on the southern tip of Vancouver Island in British Columbia, Canada

This modern city is filled with Victorian and Edwardian architecture mixed with First Nations sculpture, buildings and totems. Nestled nearby are coffee bars, craft beer, and restaurants ranging from hip to funky to traditional. They vie for the attention of every flavor of foodie, serving tourists and locals alike. 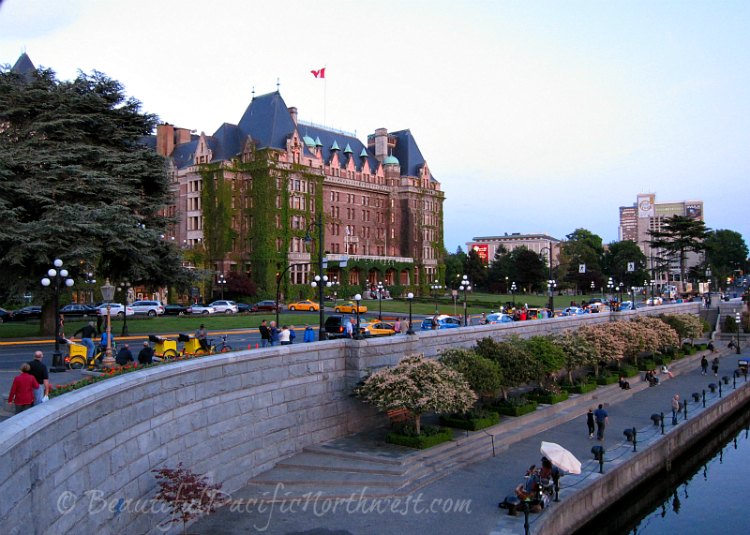 Bustling nightlife in downtown Victoria Canada during the summer, against the backdrop of the Empress Hotel and the Royal BC Museum

Downtown Victoria is fairly walkable and if it's shopping you're after, head up Government Street to the modern Bay Centre mall and Market Square, catching all the little stores, boutiques, and tourist shops along the way.

Continue on to Chinatown, saunter through the Gates of Harmonious Interest, peruse the shops down Fan Tan Alley, but keep a firm grip on reality as you peer through the historical haze into yesteryear's gambling clubs and opium dens.

Just across the Inner Harbor in Esquimalt resides the Royal Canadian Navy with the Canadian Forces Primary Reserve brass and reed band. This band performs at various venues, parades, and ceremonies around the area in support of Vancouver Island's military community. For museum info go to NavalAndMilitaryMuseum.org/. 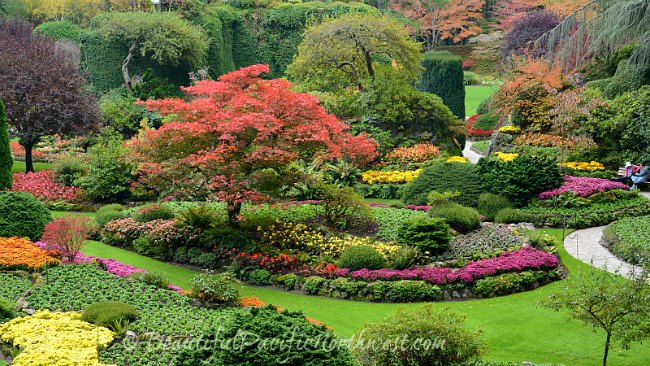 If there's time for a drive (or bus tour), head up the Saanich Peninsula in auto or bus to Butchart Gardens and/or the Butterfly Gardens.

You'll see from our photo pages why we love Butchart Gardens enough to visit during all four seasons:

Demographics of Victoria BC Canada 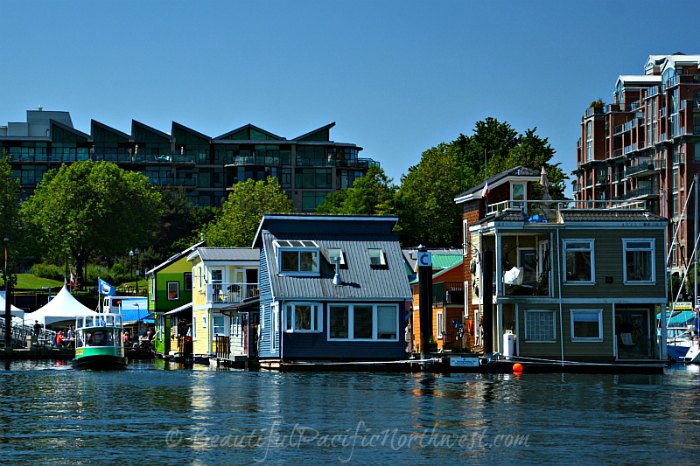 Since the discovery of this bountiful land, Europeans and Canadians have arrived to enjoy the easy lifestyle, pleasant climate and abundant beauty. Victoria itself embraces about 80,000 people, with a large population of retirees; the greater Victoria area, including her rural areas, total about 345,000 (Wikipedia).

Throughout the years diverse neighborhoods have sprung up in and around Victoria Canada: 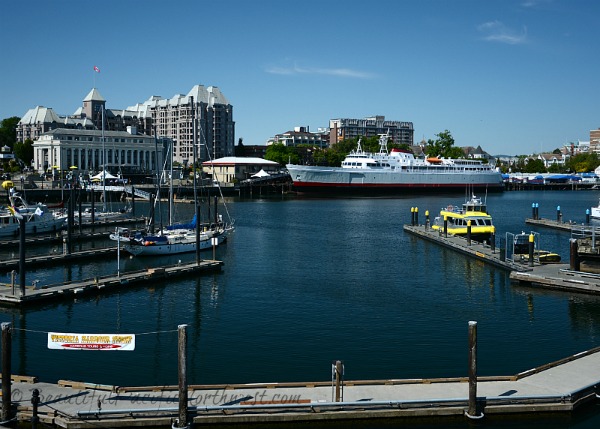 The Coho ferry boarding passengers in Victoria BC inner harbour

Getting to Victoria is fairly easy as is getting around the city. And it is oh so close  - just a short hop across a narrow strait from Vancouver BC, Seattle WA, and Port Angeles, where one can catch the Black Ball ferry for a 90-minute cruise to Victoria.

Here are a few excellent websites to peruse for more information:

At its very beginning it was home to several communities of Coast Salish peoples: the Songhees, the Saanich, and the Sooke, who had been settled in the area for several thousand years. They were there to greet the first European explorers, Juan Perez from Spain in 1774, and British Captain James Cook in 1778.

In 1843, James Douglas established a Hudson's Bay Company trading post on a site the Coast Salish peoples called Camosack, or "rush of water." Originally naming it Fort Camosun, it was then briefly known as Fort Albert, and later became Fort Victoria in 1846, in honor of Queen Victoria.

During the 1858 gold rush in Fraser Valley, British Columbia, Victoria became the hub for the arrival of gold-fevered miners from all over the world, where provisions for and transportation to the gold fields could be acquired. The population blossomed overnight from 300 to over 5000. Victoria became the busiest seaport north of San Francisco, and the largest importer of opium from Hong Kong. (The opium trade was banned in 1908.) 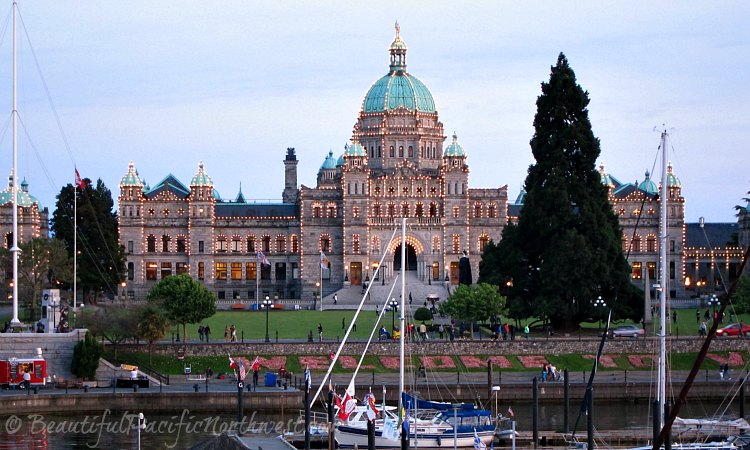 The BC Provincial Legislature building in downtown Victoria BC

Victoria Canada became the capital of the Province of British Columbia in 1871. As the city of Vancouver, on the mainland, rose to a more prominent role in shipping, manufacturing and commercialism, Victoria began to settle into her more genteel role as a seat of government, a popular tourist destination and a pleasant place to retire.

The Inner Harbor's wild scenery changed with the completion of the Parliament Buildings in 1897, and the Empress Hotel in 1908. The beauty and promise of the area also attracted industrious business men who left behind evidence of their legacies in such structures as Craigdarroch Castle, Hatley Park, Point Ellice House, Gatsby Mansion and Butchart Gardens.

Victoria in the mid-1800s was not completely wild. According to the memoir written by Martha Douglas Harris who lived in Victoria Canada at the time, the challenges of life in the wild west were present, but so also were beautiful flower and vegetable gardens and fancy parties attended by ladies in high fashion silk skirts. 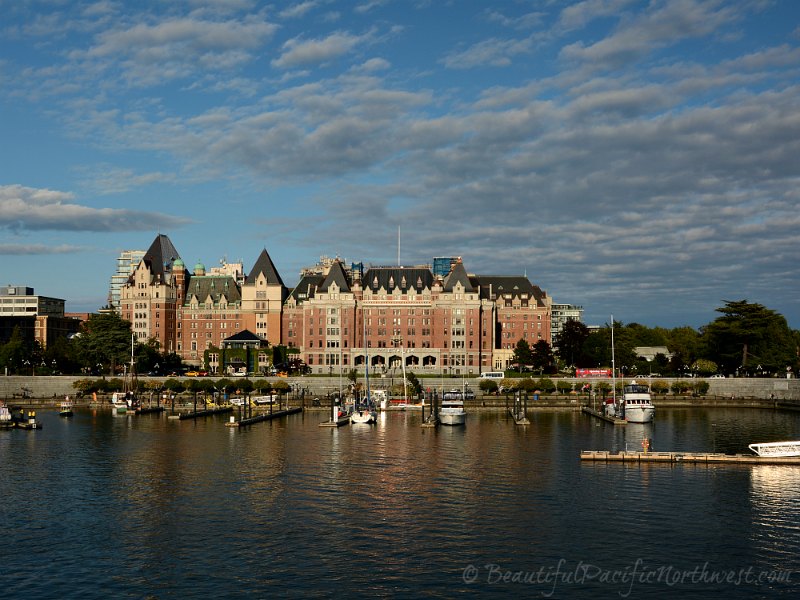 The Empress Hotel and Victoria's Inner Harbour as the afternoon sun rays lengthen.