Lake Crescent WA – Encounter the history and beauty of one of Nature’s most stunning places. Plus here are opportunities for hiking, camping, boating, fishing and relaxing around the lake.

18 miles to the west of Port Angeles Washington is a stunning, 9-mile-long lake carved by ancient glaciers.

Low oxygen levels and great depth result in water that is so deeply turquoise that, almost, one must see it to believe it. 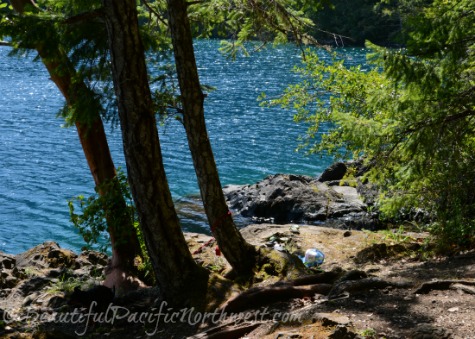 TripAdvisor Reviews of Lake Crescent in the Olympic National Park

Downtown Port Angeles is roughly 22 miles (35.4 km) to the east of Lake Crescent WA, or approximately a 30 minute drive. But, if Port Angeles is not your starting point, then:

A three-year Highway Maintenance Project is scheduled to wrap up by the end of 2019. A 12-mile stretch of Highway 101 along the south shore of Lake Crescent and a 4-mile stretch of East Beach Road near East Beach are still undergoing repairs, maintenance, and rehabilitation. Significant traffic delays may be imposed during the construction season (March through November), including 4-hour delays. However during the main tourist season (through September of 2019), expect delays of just one-half hour during working hours. Check this link for complete construction details and schedule.

The Olympic National Park offers TWO lodges at Lake Crescent, one on the north shore, and one on the south shore.

Click here for an overview of all five Olympic National Park Lodges. 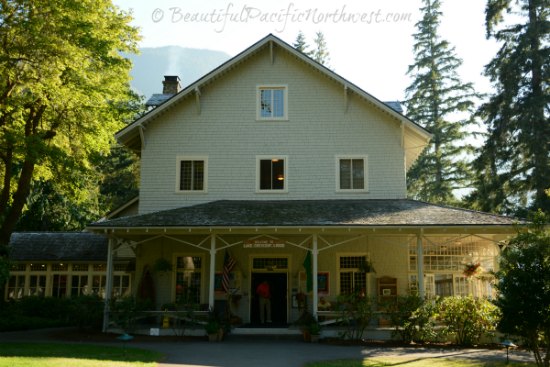 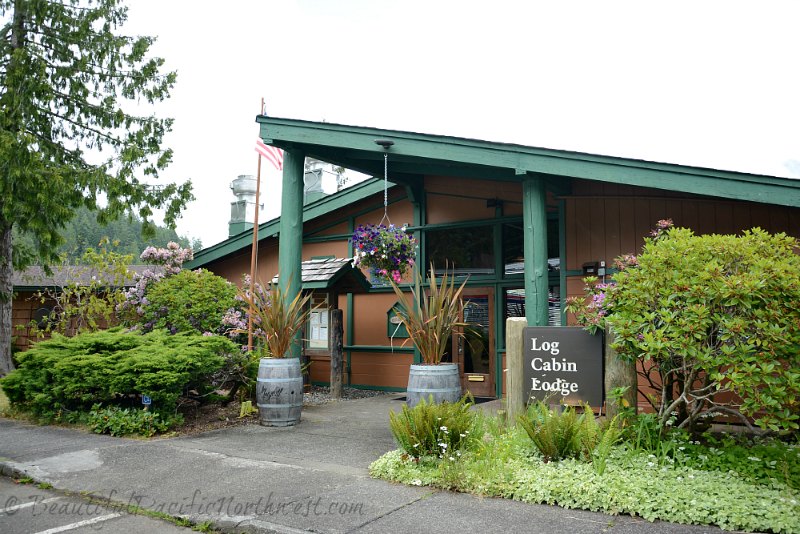 Log Cabin Lodge on the north shore of Lake Crescent.

Things to do Around Lake Crescent WA 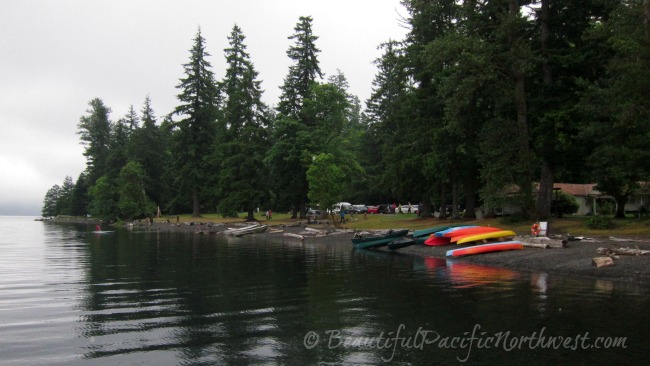 There is so much to see and do in and around Lake Crescent WA! At the very least, one can stop along the shores of Lake Crescent and enjoy a picnic. You'll find views and picnic tables:

Oh, but there are so many more Port Angeles attractions and activities in and around Lake Crescent. 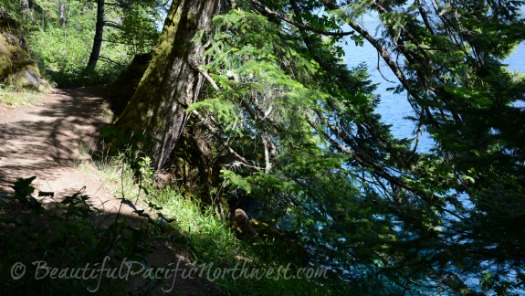 The Spruce Railroad was built in the late 1930's in order to transport spruce trees for use in World War II. The war ended before the railroad line was completed, and the effort was abandoned.

Today, many of the ties have been removed and the rail bed turned into a walking trail.

If you've allowed enough time, take a short drive to the west on Highway 101, and then take Sol Duc Road to the left (south), into the Sol Duc River Valley. Within 12 miles of the highway are:

Lake Crescent is an integral part of the history of the west end of the Olympic Peninsula.

To hear the native tribes tell it, Lake Crescent as we know it was formed when Mount Storm King was unhappy with the Klallam and Quileute tribes fighting at its feet. It therefore hurled a mighty rock which became wedged at the outlet of the lake, raising the level of the water. 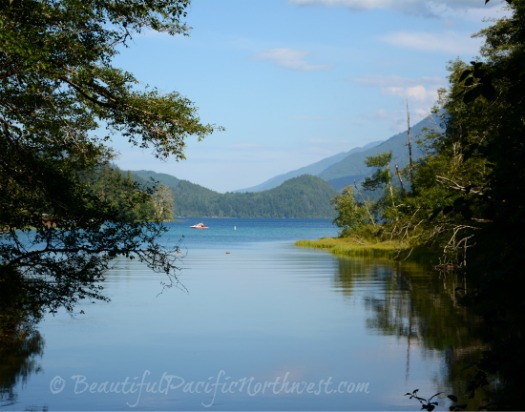 Lake Crescent as seen from the Spruce Railroad Trail

What we do know is that an enormous landslide split the lake into two about 7,000 years ago. The east tip of the lake became a separate lake, now named Lake Sutherland.

By the late 1890's, agriculture and the timber industry were on the rise, especially in the Forks and surrounding areas, and a slow but steady rise in settlers was occurring.

The Log Hotel was built in 1895 on the north shore of Lake Crescent at the spot where the Port Crescent Road met Lake Crescent, an area called "Piedmont."

In 1900, there were no through-roads connecting Port Angeles and parts east with Forks and settlements to the west. The road from Port Angeles ended at the East Beach of Lake Crescent WA.

People arriving at Lake Crescent either from the north or the east needed to hop on a ferry for transportation to points around the lake.

Ferries stopped at the East Beach, at the Log Hotel on the north shore, at Singer's Tavern (which is now Lake Crescent Lodge), and at Fairholme at the far westerly point of the lake.

By 1922, Washington State Road 9, now called Olympic Loop Highway (Hwy 101), had advanced along the south shore of Lake Crescent. For years it was a dirt road. The entire loop was completed by 1931.

Lady of the Lake

In 1936, events began to transpire that would result in the tragic story of the Lady of the Lake. Hallie Latham of Port Angeles was employed at Singer's Tavern on the lake. She married Monty Illingworth, a drinker and, apparently, a hothead. In a little more than one year of marriage, Hallie was battered and abused on multiple occasions. In December 1937, she disappeared altogether, having run off with another man according to Monty.

Below: a very moody Lake Crescent may have looked something like this on the December day the Lady of the Lake disappeared. 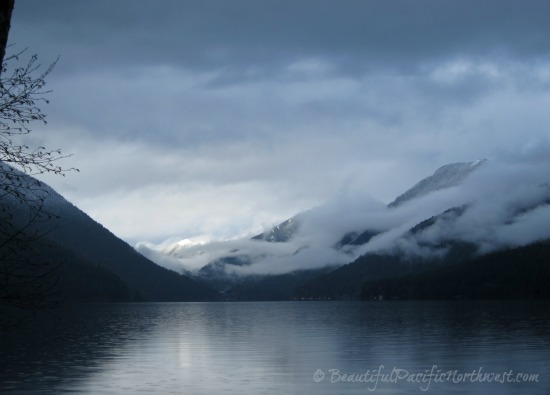 Lake Crescent on a stormy afternoon, with misty fog partially cloaking a snowy peak in the distance

About three years later in 1940, a body floated to the surface of Lake Crescent. The body's outer layers had saponified and turned to soap due to the very cold lake water and 3 years of delayed decomposition.

The discovery of the grisly body made national headlines. The autopsy revealed a violent death, and because she could not initially be identified, she became known to the entire nation simply as "The Lady of the Lake." Months later, clues such as the body's unusual dental work brought its true identity to light.

Monty was eventually found guilty of killing Hallie unpremeditatedly in a rage, wrapping her body in blankets, attaching weights to it, and dropping it into the deepest part of the lake. He spent 9 years in the Walla Walla Washington penitentiary before being paroled.

Below: Enjoy these photos of our hike along the Spruce Railroad Trail, north shore of Lake Crescent WA. Click on a photo to view all in full size. 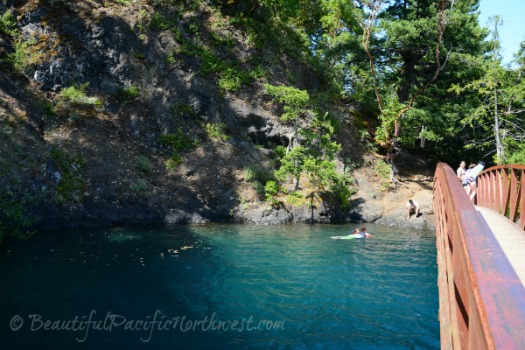 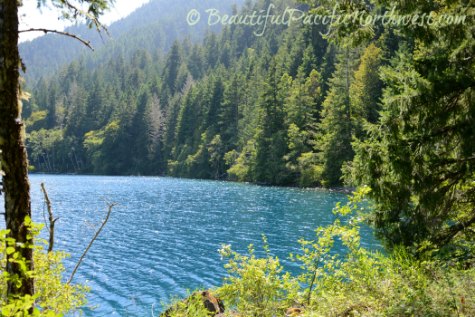 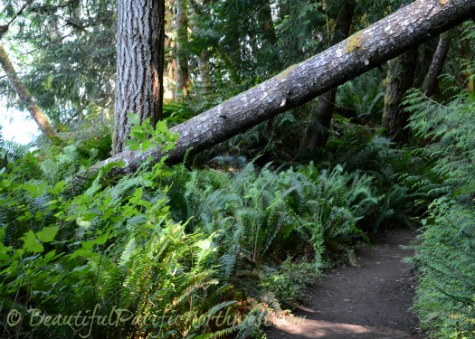 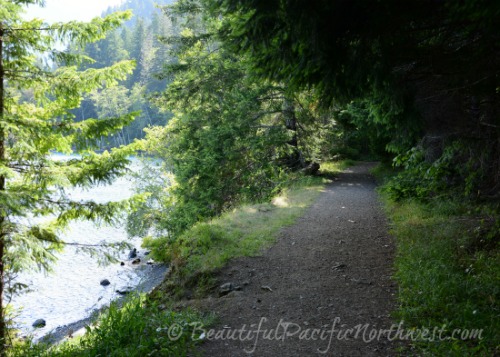 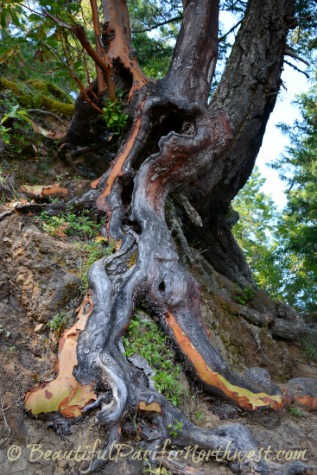 Gnarly, fire-damaged roots and trunk of a Madrona next to the Spruce Railroad Trail 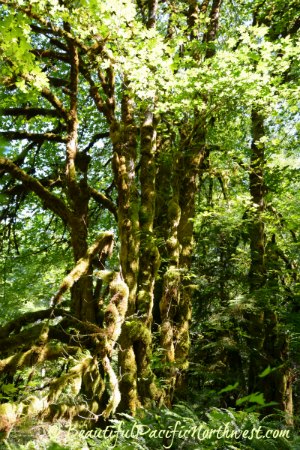 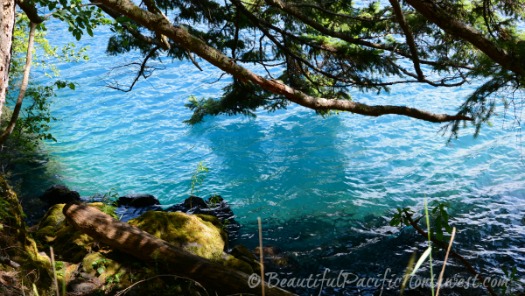 
Have You Been to This Beautiful Place?
Tell Your Story and Share Your Photos With Us!

Nature can present us with unexpected, memorable, and breathtaking moments! Do you have a great story or an interesting experience that took place in this beautiful part of the Olympic National Park? We'd love to hear about it! Feel free to share it in the form below. Be as wordy and as descriptive as you like. Include photos as well, if you have them; there is plenty of room for it all on our website.