Types of Salmon. This page is an overview of various salmon species, with a focus on Pacific salmon native to the Pacific Northwest.

While not all 'salmon,' these fish species are all part of the larger family Salmonidae:

Five species of Pacific salmon are native to the Pacific Northwest and also throughout the northern Pacific Ocean.

A sixth species is found along the western rim of the Pacific, but not in the Pacific Northwest.

Chum salmon populations range from Sacramento California in the south to all parts north throughout the Pacific Ocean, including the waters around Japan, Russia, and in Canada into the MacKensie River in the heart of the Northwest Territories.

The range of Chinook salmon extends from the mid-arctic regions down to the Central Californian coast.

Pink salmon also goes by humpback or humpie salmon for the noticeable humps that develop as the males enter their spawning stage – (O. gorbuscha)

Pink salmon are the smallest of the Pacific salmon species, averaging in size about 3.5 – 4 pounds (1.7 kg). Their range extends from Northern California in the eastern Pacific to Korea in the western Pacific, and throughout the northern reaches of the Pacific Ocean.

Coho salmon live in coastal waters from Alaska all the way south to Monterrey Bay, California. They are also occasionally seen in the Mackensie River in central Canada. 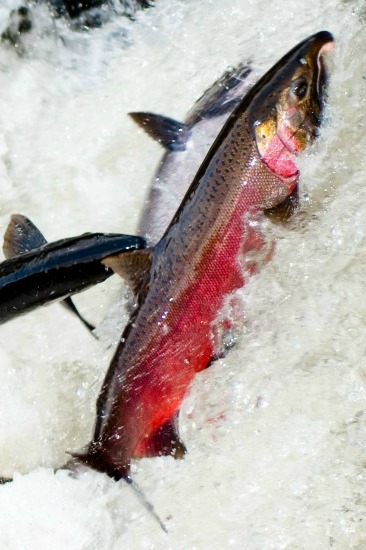 Sockeye salmon range extends along both the eastern and western coasts of the northern Pacific Ocean, from the Klamath River in California and Hokkaido Island in Japan, north to the Arctic and Siberian regions.

The Sol Duc River is just one of many rivers and streams throughout the Pacific Northwest in which one or more of these 5 types of salmon spawn.

It is easy to view the Coho salmon run along the Sol Duc River. The best time to do that is October to November.

At the point where the Sol Duc tumbles over a boulder field known as the Salmon Cascade, the Coho must leap upstream to reach their spawning grounds. Here is a video of that event:

Rainbow, Cutthroat, and Steelhead varieties of trout are closely related to Pacific salmon as they share the same genus. Rainbow trout are Oncorhynchus mykiss, and cutthroat and steelhead are subspecies of the same. They also migrate to the ocean and then return to spawn. Perhaps for this reason they are sometimes called salmon, for example, “steelhead salmon,” however they are rightly species of rainbow trout and have white flesh.

Many species of trout and the closely related charr are found throughout the Pacific Northwest.

Types of Salmon not found in the Pacific Northwest

(O. masou) is not native to the Pacific Northwest. This species of salmon can be found in the western Pacific, in Russian, Japanese and Korean waters.

Atlantic salmon belong to the genus and species Salmo salar. Atlantic salmon is more closely related to trout than to Pacific salmon. They used to be found throughout the northern reaches of the Atlantic Ocean, however they are no longer common in the wild. They are considered critically endangered due to habitat pollution and damage.

Today, 99% of Atlantic salmon on the market is farmed. Testing shows these fish frequently to be high in environmental toxins such as dioxin.

More about the Salmon Life Cycle