Follow a Kenmore Airlines flight from Seattle to Port Angeles WA via photos. Lose your fear and catch your own scheduled or chartered flight to Pacific Northwest destinations.

Kenmore Airlines flies into over 45 destinations throughout the Pacific Northwest.

These photos of a recent Kenmore Air flight should give you a general idea of what you can expect when you fly a Kenmore (or other) puddle-jumper – great views and excellent service that is as timely as the weather will allow.

The contact info for catching your own scheduled or chartered flight to many beautiful Washington State and Canadian Pacific destinations is below.

On a late-September day in 2012, I dropped guests and their rental car at Sea-Tac Airport, and then flew Kenmore Air back home to Port Angeles. Since I had been up since 3 a.m., flying instead of driving the 2.5 hours back to Port Angeles was a welcome choice. 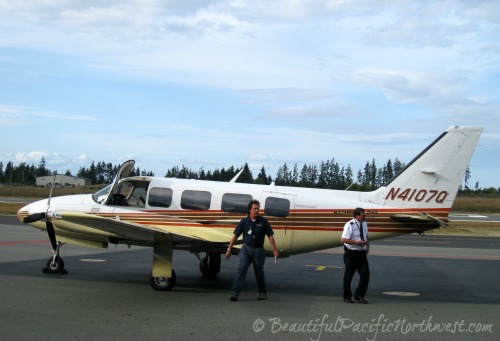 Kenmore aircraft on the tarmac at Boeing Field

If you've never flown in a small single-engine plane, the idea may be a bit frightening.

We hope these pictures will take some of the mystery out of the experience so you can enjoy the great views from just a few thousand feet up. We know that pictures won’t actually do it justice; hopefully you'll get the chance to fly Kenmore Airlines yourself.

For me, the journey starts here at this desk located near Gate 00 (pictured below), at the far end of Baggage Claim on the ground floor of Seattle-Tacoma International Airport (SEA). 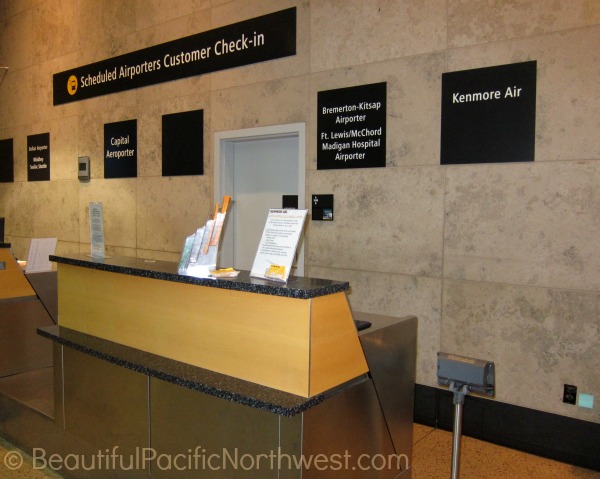 This is the same desk at which one can catch a variety of on-the-ground shuttles around the greater Seattle-Tacoma area, plus Kenmore Airlines flights to many destinations, depending on the time of day. 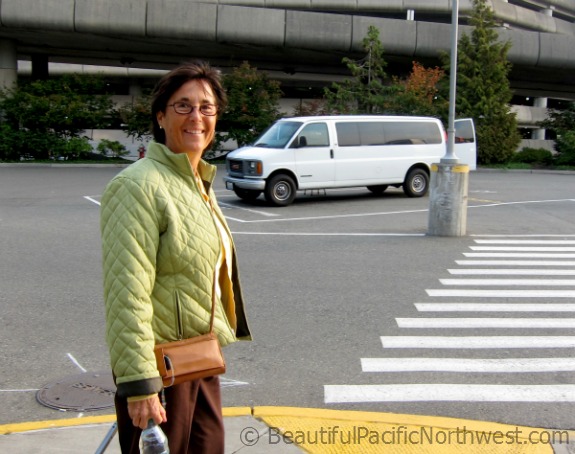 Ms. Winny Rush of Sarasota, Florida, chose the Olympic Peninsula as a perfect destination for celebrating her 60th birthday. She will share the flight to Port Angeles WA with 4 other passengers, including myself.

Once at Boeing Field, we arrived at the Kenmore Airlines desk (below), but didn’t need to check in. Our shuttle driver had done all the checking in for us. Around the corner was a comfortable waiting room.

Pictured at right: Ms. Winny Rush and the free shuttle van provided for the trip to Boeing Field from Sea-Tac. 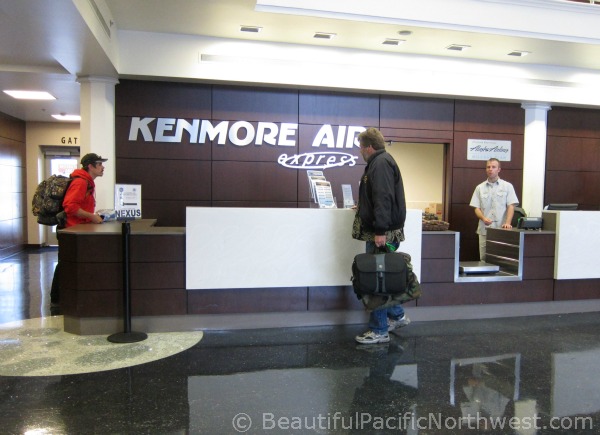 The plane had been delayed by fog on the ground in Port Angeles, so our 10:05 a.m. flight got bumped back roughly 20 minutes, not too big a deal.

The plane from Port Angeles arrived, the fuel truck immediately topped off both tanks, the luggage was stowed below, and we boarded the plane for the return flight to Port Angeles, WA. 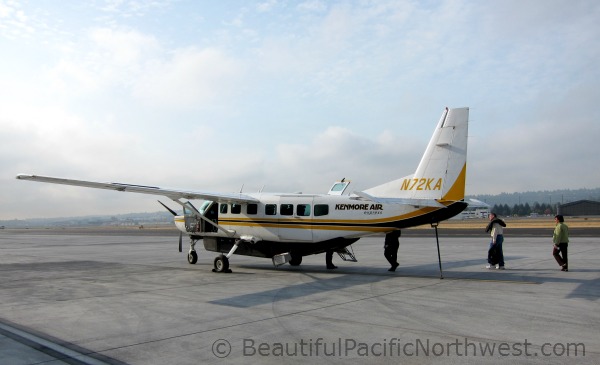 Boarding the aircraft for a flight to Port Angeles

Enjoy the rest of the
Kenmore Airlines flight

Enjoy the rest of the 35-minute flight with me, as I catch sight of various landmarks between Seattle and Port Angeles, WA. We still had a bit of fog obscuring our views; perhaps your own trip will be even more spectacular.

Click on any photo to open a gallery of full-size pictures.

Plane has lifted into the air above Boeing Field bound for Port Angeles, WA. 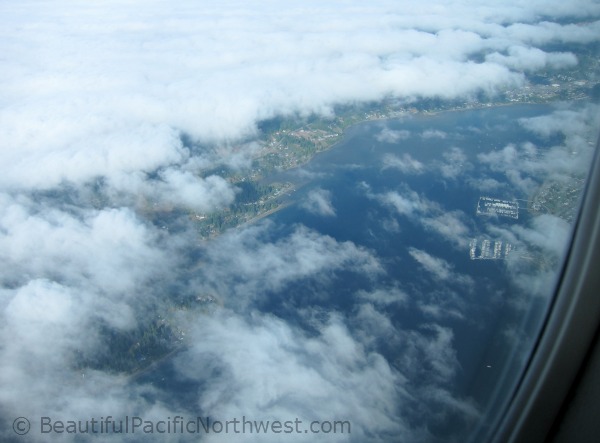 Above the Seattle fog in Kenmore Airlines flight to Port Angeles WA.

Right: We've lifted into the air and are leaving Boeing Field behind. The Seattle region was still partially obscured by fog at 10:30 a.m.

There was lots and lots of low fog…until we entered the "Blue Hole" - the famous rainshadow that frequently hovers over the entire north Olympic Peninsula, and especially over Sequim, Washington. Today the Blue Hole covered the region from Port Ludlow all the way beyond Port Angeles. Once we reached Port Hadlock, the rest of our flight was virtually fog-free – yay!

Below: The area east of Discovery Bay and south of Port Townsend, over Port Hadlock and Port Ludlow, is fog-free. 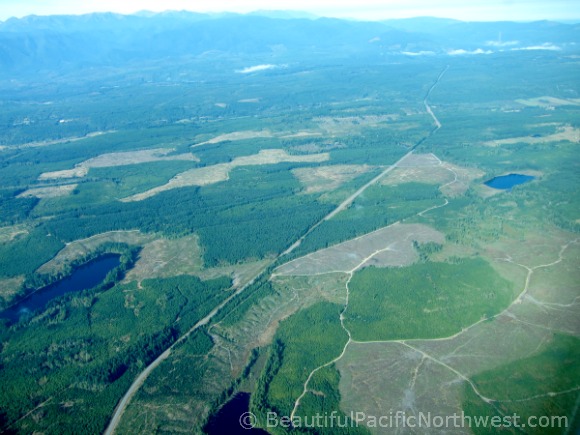 Port Hadlock and the Olympic Peninsula.

Discovery Bay and Sequim Bay are two easily distinguished landmarks. The small village of Blyn (right) straddles Jimmycomelately Creek which feeds into Sequim Bay. Blyn is home to the Jamestown S'Klallam tribe and the popular 7 Cedars Casino, which is clearly visible from the air.

Right: The glistening silver ribbon is the Dungeness River flowing from the mountains into the Strait of Juan de Fuca. 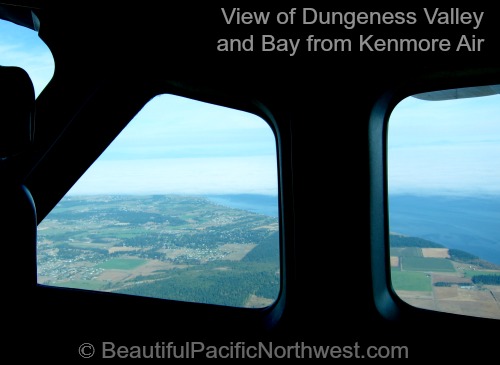 Dungeness Valley and Sequim WA from the air

Pictured above: There was still a stubborn ribbon of fog offshore, partly obscuring a quarter-mile of the Dungeness Valley bordering the Strait of Juan de Fuca.

Had there been no fog, we might have been able to spot the Dungeness Lighthouse guarding the 5.5-mile-long Dungeness Spit.

Right: The flight path took us directly above Port Angeles, which is visible through the plane's windshield. As pleasant as the trip has been, the sight of the runway is always welcome. 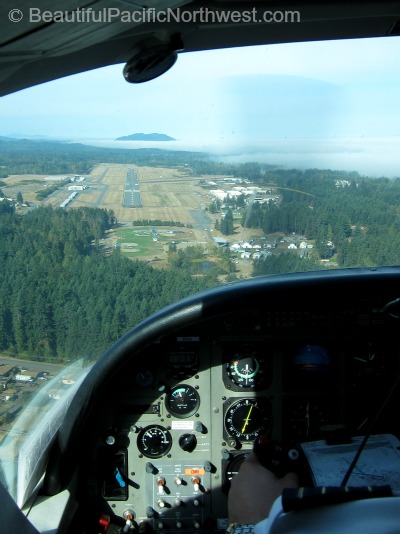 Left: What looks like a green patchwork quilt of crops is actually one of the main Pacific Northwest 'crops:' timber. The Washington Department of Forestry manages the forests, which are harvested only every 40 years or so. 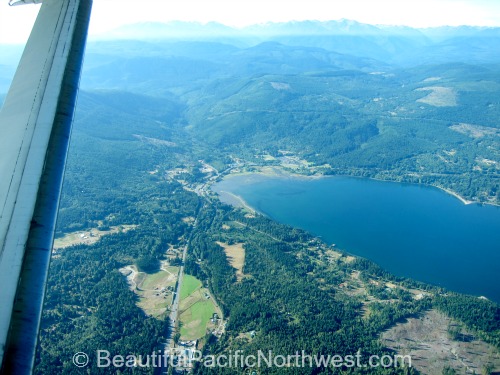 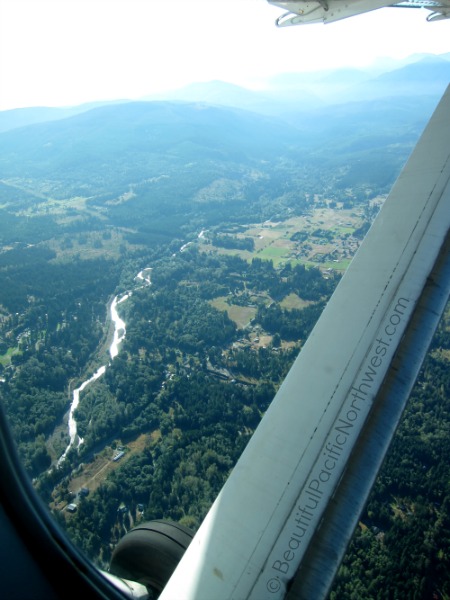 Flying over the Dungeness River 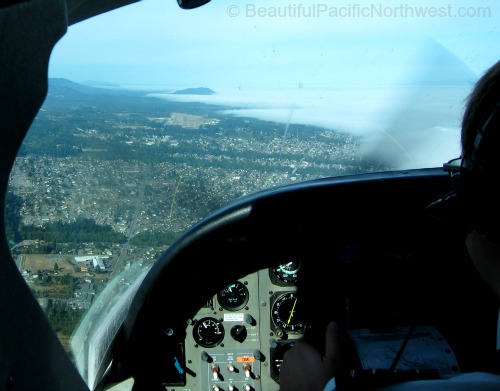 Left: The plane is in its final approach into William R. Fairchild "International" Airport.

The ball fields and buildings of the Clallam County Fairgrounds are visible just east of the airstrip (cradled between the trees below the runway.) 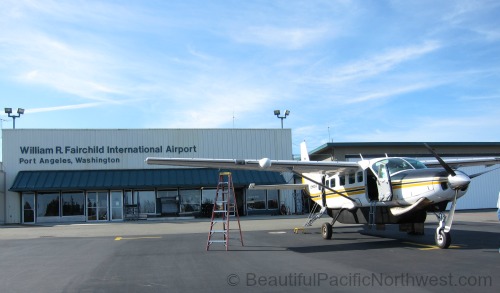 We're on the ground again at William  R. Fairchild International Airport in Port Angeles, Washington, after a pleasant and successful flight.

Flights can be chartered to a multitude of other locations in and around the Olympic Peninsula, Seattle, San Juan Islands, Vancouver Island, and the west coast of British Columbia. (Note: Kenmore Air no longer flies between Boeing Field and Port Angeles, but does fly to all other listed destinations. See website.)

Fun Facts: Kenmore Air was founded in 1946, and currently has a fleet of 29 planes.